http://www.tampabay.com/news/military/veterans/veterans-express-frustration-to-va-over-camp-lejeune-benefits/2256666
TAMPA — Robert Shuster of Hudson stood up Saturday at a public meeting with the Department of Veterans Affairs and federal scientists studying the health effects of polluted drinking at Camp Lejeune, N.C. 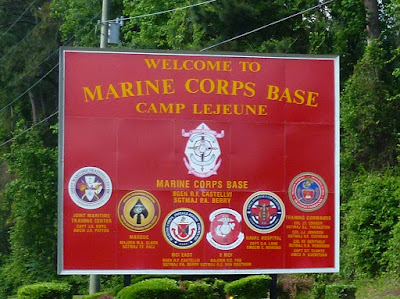 He held up two pieces of paper. One was the surgical pathology report Shuster sent to the VA that diagnosed him with sarcoma. The other document was a letter from the VA denying his claim for benefits, saying in stilted language the disease did not exist in him — he didn't have a malignancy.
"How can it not exist?" Shuster, 54, asked plaintively.
About 150 Marine Corps veterans and family members crowded a room at the Grand Hyatt Tampa Bay for a town hall meeting to hear VA officials and federal scientists provide an update on work studying contamination at the North Carolina base.
The VA representatives heard great frustration from veterans about their difficulties in getting the agency to provide benefits for those who were sickened by the water.
Up to a million veterans were exposed to what scientists consider one of the nation's worst episodes of water contamination. Drinking water at the base was tainted with a stew of industrial solvents and components of gasoline for at least 30 years ending in the 1980s.
Tens of thousands of those veterans and their family members now live in Florida, the state with the second-highest number of potential victims behind North Carolina, federal figures show.
The meeting included epidemiologists at the Agency for Toxic Substances and Disease Registry, the lead agency studying health effects. The agency has concluded through a number of studies that contaminated water created a variety of health effects, from birth defects to some types of cancer.
But for veterans who came to the meeting, most of their concern was directed at the VA.
"You're not helping us, you're hurting us," said Camp Lejeune veteran Paul Maslow, 64, of Daytona Beach, who said he has inoperable tumors on his spine and elsewhere in his body. "The more you delay, the more of us who are going to die. And we thank you very much for that."
Some expressed pointed anger at the VA "subject-matter experts" who often weigh in on claims, they said, without seeming to pay particular attention to the evidence veterans submit to get benefits.
MORE
Posted by AgentOrangeZone at 11:33 AM