Maxus Energy Corp. is defending a $130 million settlement with its corporate parent over responsibility for the cleanup of New Jersey’s contaminated Passaic River.
Maxus was one of dozens of companies tagged with blame for discharging hazardous substances into the river decades ago. The company filed for bankruptcy in June after striking a bargain with owner YPF SA over its corporate parent’s alleged liability for the cleanup.
Maxus’s deal with YPF, Argentina’s state-owned oil company, triggered a protest from Occidental Petroleum Corp. ’s chemical subsidiary, known as OxyChem, which has been sparring with YPF for years over who should be on the hook for cleaning up the river. 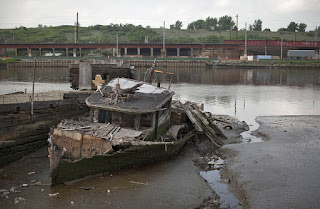 Lawyers for Maxus on Monday acknowledged the settlement “has engendered controversy” but maintained it was the best option “when compared to the risks of losing everything at trial and garnering no value for the debtors’ creditors.”
“A fixed settlement payment of $130 million, along with funding of the costs of these bankruptcy cases, was of greater value to the debtors’ estates than the uncertain prospect of potentially recovering nothing at all,” Maxus lawyers said in a filing with the U.S. Bankruptcy Court in Wilmington, Del.
A New Jersey state court has ruled that Maxus and an affiliate were responsible for dumping dioxin, a highly toxic chemical and suspected carcinogen, into the river in the 1950s and 1960s.
Under the deal, which requires court approval, YPF has agreed to provide Maxus with $130 million in return for Maxus dropping any “alter ego” claims it may have against its parent for cleaning up the river.
OxyChem contends that YPF is legally responsible as an alter ego for the environmental liabilities owed by its subsidiary, Maxus. Maxus filed for bankruptcy in June, just days before OxyChem was slated to head to court over litigation seeking to put YPF on the hook for Maxus’s environmental obligations.
OxyChem, which purchased part of Maxus’s business in 1986 and sold it to YPF a decade later, has called the proposed settlement a “highly choreographed multiyear process” through which YPF is seeking to sidestep its environmental obligations.
MORE
Posted by AgentOrangeZone at 9:03 AM No comments:

READ THE STORY
Based on a study of 85 Gulf War Veterans, VA researchers in Minneapolis have developed a tentative panel of blood markers they say can verify a diagnosis of Gulf War Illness with 90 percent accuracy.
The method now needs validation in larger groups of patients, say the researchers.
The findings appeared June 28, 2016, in the journal PLOS One. Lead author was Dr. Gerhard Johnson, with VA and the University of Minnesota.
As many as 300,000 Veterans—about 4 in 10 of those who deployed to the Persian Gulf during operations Desert Shield and Desert Storm in the early 1990s—are now estimated to have Gulf War Illness, more than 25 years later. That figure comes from a VA survey, based on Veterans' self-reported symptoms, published earlier this year.
But the illness is still difficult to define and diagnose, and there is no broad agreement on the diagnostic criteria, let alone an exact cause. Commonly reported symptoms include pain, fatigue, mental fog, memory problems, headaches, insomnia, and gastrointestinal problems.
Chronic inflammation in the body may be the chief underlying culprit, or at least one of the key factors driving the illness, suggests the new study.

Biomarkers point to inflammation as culprit

The study found that several commonly used blood tests—all indicating inflammation—tended to yield different results between Veterans who reported symptoms consistent with Gulf War Illness, and those who did not.
The researchers suggest that a panel of such markers, once validated in further research, could serve as an objective biomarker for the condition. This could help clinicians diagnose the illness. It could aid further research as well. As of now, different research groups use different criteria for determining who has the condition, and that may hamper progress.
The study involved 57 Gulf War Veterans who met the current diagnostic criteria for the illness, and 28 who did not. They were mostly white, male, and middle-aged.
The researchers tested the volunteers' blood samples for red, white, and platelet counts, and for more than 60 different proteins.
Three types of white blood cells—lymphocytes, monocytes, and neutrophils—were all higher in the Gulf War Illness group. Platelets—small cells that form clots to heal injured blood vessels—were also elevated.
MORE
Posted by AgentOrangeZone at 8:58 AM No comments:

Although production of organochlorine chemicals was banned in the United States in 1977, these compounds can remain in the environment and become absorbed in the fat of animals that humans eat, leading to exposure.
"There's a fair amount of research examining exposure to these chemicals during pregnancy in association with other outcomes, like birth weight -- but little research on autism, specifically," Lyall said. "To examine the role of environmental exposures in risk of autism, it is important that samples are collected during time frames with evidence for susceptibility for autism -- termed 'critical windows' in neurodevelopment. Fetal development is one of those critical windows."

Researchers and scientists from California’s Department of Public Health, members of Kaiser Permanente’s Division of Research and numerous others have released a paper—“Polychlorinated Biphenyl and Organochlorine Pesticide Concentrations in Maternal Mid-Pregnancy Serum Samples: Association with Autism Spectrum Disorder and Intellectual Disability”—describing their findings.

The team looked at a population sample of 1,144 children born in Southern California between 2000 and 2003. Data was accrued from mothers who had enrolled in California's Expanded Alphafetoprotein Prenatal Screening Program, which is dedicated to detecting birth defects during pregnancy.
Participants' children were separated into three groups: 545 who were diagnosed with autism spectrum disorder, 181 with intellectual disabilities but no autism diagnosis, and 418 with a diagnosis of neither.

Blood tests taken during the second trimester were used to determine the levels of exposure. There are tons of chemicals detectable in our bodies from exposure—including two different organochlorine classified chemicals, PCBs and OCPs. Lyall and others were interested in the “levels” of this exposure.
MORE
Posted by AgentOrangeZone at 8:55 AM No comments: 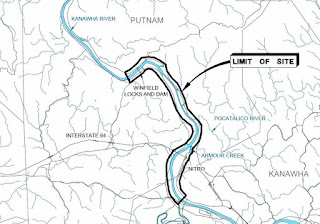 The EPA published a short public notice about the proposal in the Gazette-Mail Thursday, and it made available a nearly 1,500-page report that describes the study of the contamination and the consideration of various alternatives for cleaning it up.
“This was done over several years and much, much discussion,” said Joseph Gabriel, environmental remediation manager for Monsanto. “All of the options were evaluated, and the overall opinion was this was the best alternative.”
Jake McDougal, a program manager with the Department of Environmental Protection Office of Environmental Remediation, said Friday that the proposal is “a consensus agreement” between federal and state officials and Monsanto.
The cleanup — covering an area of the Kanawha to the Winfield Lock and Dam — would address toxic contamination of the river that dates back many decades, to when Monsanto began in the late 1940s to make a powerful herbicide ingredient called 2,4,5-T.
In its best-known use, the federal government bought 2,4,5-T to make Agent Orange, the defoliant deployed widely in the Vietnam War. Monsanto’s 2,4,5-T was contaminated with a highly toxic dioxin compound known as 2,3,7,8-TCDD.
Dioxin has been linked to cancer, birth defects, learning disabilities, endometriosis, infertility and suppressed immune functions. The chemical builds up in tissue over time, meaning that even small exposures can accumulate to dangerous levels.

It may be time to review your medical records

READ THE STORY
Nowadays it seems like pretty much everything can kill you. Don’t smoke, don’t eat fast food, don’t drink alcohol or you’ll die an early, agonizing death.
Personally, I intend on going down like my idol — George Burns — drinking whiskey and smoking cigars when I’m 100 and laughing at the poor people who still died young while never actually enjoying life. But with all the things I get to report on, my concerns for my health and well-being tend not to revolve around the more accepted cancer-causing vices.

In the Vietnam era, our veterans developed some major health issues because of the use of Agent Orange. My wife’s uncle died from the long-term health effects caused by Agent Orange, and all the Vietnam veterans I know who were exposed have serious health issues because of it.
For some of us slightly younger guys, the next big concern was the forced application of anthrax shots. Quite a few veterans developed symptoms of what was labeled Gulf War Syndrome, a medical condition causing fatigue, chronic headaches and skin and respiratory disorders. Some of the long-term side effects of the anthrax shot series are very similar.
MORE
Posted by AgentOrangeZone at 6:30 PM No comments:

Monsanto Co (MON.N) has withdrawn an application seeking approval for its next generation of genetically modified cotton seeds in India, a major escalation in a long-running dispute between New Delhi and the world's biggest seed maker.
A letter sent by Monsanto's local partner in India, the conglomerate's biggest market outside the Americas, strongly objects to a government proposal that would force Monsanto to share its technology with local seed companies.
The company is also at loggerheads with India over how much it can charge for its genetically modified cotton seeds, costing it tens of millions of dollars in lost revenue every year.
The unprecedented decision to pull the application, which has not previously been reported, could set back Monsanto's efforts to introduce its new seed, called Bollgard II Roundup Ready Flex technology, for years and lead to further losses.
It will also ratchet up pressure on the Indian government, as it undermines Prime Minister Narendra Modi's efforts to make the country look more attractive to foreign investors.
It could also hurt Indian cotton farmers. The new seed variety helps fight against weeds that sap the cotton crop of vital nutrients and depress yields.
A Monsanto spokesman said the withdrawal of the application was "an outcome of the uncertainty in the business and regulatory environment", but that the move had "no impact on our current cotton portfolio being sold in India".
A spokesman for the environment ministry, which had the application before it, was not available for comment.
In a letter, dated July 5, Maharashtra Hybrid Seeds Co Ltd (Mahyco), Monsanto's technology partner in India, singled out a government proposal, mooted in May, that would require Monsanto to share its proprietary technology.
MORE
Posted by AgentOrangeZone at 6:33 AM No comments:

Although production of organochlorine chemicals was banned in the United States in 1977, these compounds can remain in the environment and become absorbed in the fat of animals that humans eat, leading to exposure.
[...]
"There's a fair amount of research examining exposure to these chemicals during pregnancy in association with other outcomes, like birth weight -- but little research on autism, specifically," Lyall said. "To examine the role of environmental exposures in risk of autism, it is important that samples are collected during time frames with evidence for susceptibility for autism -- termed 'critical windows' in neurodevelopment. Fetal development is one of those critical windows."

Researchers and scientists from California’s Department of Public Health, members of Kaiser Permanente’s Division of Research and numerous others have released a paper—“Polychlorinated Biphenyl and Organochlorine Pesticide Concentrations in Maternal Mid-Pregnancy Serum Samples: Association with Autism Spectrum Disorder and Intellectual Disability”—describing their findings.
MORE
Posted by AgentOrangeZone at 6:31 AM No comments: