http://www.greaterkashmir.com/news/op-ed/burning-garbage-a-health-hazard/205557.html
Waste-to-energy or energy-from-waste is the process of generating energy in the form of electricity and/or heat from the primary treatment of waste. Waste to Energy is a form of energy recovery. Most processes produce electricity and/or heat directly through combustion, or produce a combustible fuel commodity, such as methane, methanol, ethanol or synthetic fuels,

Incineration, the combustion of organic material such as waste with energy recovery, is the most common Waste to Energy implementation. Incinerators reduce the volume of the original waste by 95-96 percent, depending upon composition and degree of recovery of materials such as metals from the ash for recycling
Incinerators have electric efficiencies of 14-28%. In order to avoid losing the rest of the energy, it can be used for e.g. district heating (cogeneration). The total efficiencies of cogeneration incinerators are typically higher than 80% (based on the lower heating value of the waste). 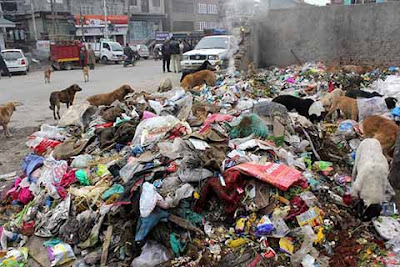 The method of using incineration to convert municipal solid waste (MSW) to energy is a relatively old method of Waste to Energy production. Incineration generally entails burning waste (residual MSW, commercial, industrial and RDF) to boil water which powers steam generators that make electric energy and heat to be used in homes, businesses, institutions and industries. One problem associated with incinerating Municipal Solid Waste to make electrical energy, is the potential for pollutants to enter the atmosphere with the flue gases from the boiler. These pollutants can be acidic and in the 1980s were reported to cause environmental damage by turning rain into acid rain.
In thermal Waste to Energy technologies, nearly all of the carbon content in the waste is emitted as carbon dioxide (CO2) to the atmosphere (when including final combustion of the products from pyrolysis and gasification; except when producing bio-char for fertilizer). Municipal solid waste (MSW) contain approximately the same mass fraction of carbon as CO2 itself (27%), so treatment of 1 metric ton (1.1 short tons) of MSW produce approximately 1 metric ton (1.1 short tons) of CO2.
In the event that the waste is landfilled, 1 metric ton (1.1 short tons) of MSW would produce approximately 62 cubic metres (2,200 cu ft) methane via the anaerobic decomposition of the biodegradable part of the waste. This amount of methane has more than twice the global warming potential than the 1 metric ton (1.1 short tons) of CO2, which would have been produced by combustion. In some countries, large amounts of landfill gas are collected, but still the global warming potential of the landfill gas emitted to atmosphere In addition, nearly all biodegradable waste is biomass. That is, it has biological origin. This material has been formed by plants using atmospheric CO2 typically within the last growing season. If these plants are regrown the CO2 emitted from their combustion will be taken out from the atmosphere once more.
Another very dangerous chemical found in the solid waste is Dioxin. Dioxins are environmental pollutants. They belong to the so-called “dirty dozen” - a group of dangerous chemicals known as persistent organic pollutants (POPs). Dioxins are of concern because of their highly toxic potential. Experiments have shown they affect a number of organs and systems. Once dioxins enter the body, they last a long time because of their chemical stability and their ability to be absorbed by fat tissue, where they are then stored in the body.
The chemical name for dioxin is: 2,3,7,8- tetrachlorodibenzo para dioxin (TCDD). The name "dioxins" is often used for the family of structurally and chemically related polychlorinated dibenzo para dioxins (PCDDs) and polychlorinated dibenzofurans (PCDFs). Certain dioxin-like polychlorinated biphenyls (PCBs) with similar toxic properties are also included under the term “dioxins”. Some 419 types of dioxin-related compounds have been identified but only about 30 of these are considered to have significant toxicity, with TCDD being the most toxic.In terms of dioxin release into the environment, uncontrolled waste incinerators (solid waste and hospital waste) are often the worst culprit dioxin disturbs the endocrine balance in the reproductive systems of women in particular. Endometriosis, spontaneous abortion and complicated pregnancies may result from dioxin poisoning in women.


MORE
Posted by AgentOrangeZone at 2:52 PM