Monsanto Goes To Trial For Crime Against Nature And Environment; ‘Most Serious Threat Humans Ever Faced?’

http://www.ischoolguide.com/articles/37624/20151207/monsanto-crime-against-humanity.htm
Biotech company Monsanto will face international tribunal over crimes against nature and humanity, and ecocide. 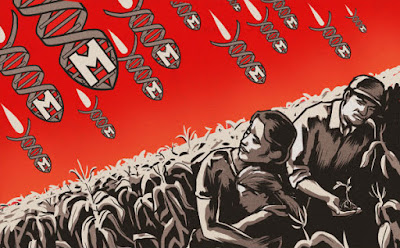 "The Tribunal will rely on the 'Guiding Principles on Business and Human Rights' adopted at the UN in 2011. It will also assess potential criminal liability on the basis of the Rome Statue that created the International Criminal Court in The Hague in 2002, and it will consider whether a reform of international criminal law is warranted to include crimes against the environment or ecocide, as a prosecutable criminal offense, so that natural persons could incur criminal liability," the Monsanto Tribunal, an international group of professionals, said in a statement.
(OCA), IFOAM International Organics, Navdanya, Regeneration International (RI), and Millions Against Monsanto according to a report by Disinformation.

"The time is long overdue for a global citizens' tribunal to put Monsanto on trial for crimes against humanity and the environment. We are in Paris this month to address the most serious threat that humans have ever faced in our 100-200,000 year evolution-global warming and climate disruption," Ronnie Cummins, president of the Organic Consumers Association, said.
Monsanto's trial for crimes against humanity and nature is scheduled to take place in The Hague, Netherlands from Oct 12 to 6 of next year.

MORE
Posted by AgentOrangeZone at 11:11 AM