http://www.newsworks.org/index.php/local/new-jersey/88952-dirty-little-secrets-new-jerseys-poorest-live-surrounded-by-contamination
Agent Orange, the chemical used to clear the jungle during the Vietnam War, was made in New Jersey. It’s now at the bottom of the Passaic River and buried under Newark, entombed in cement. 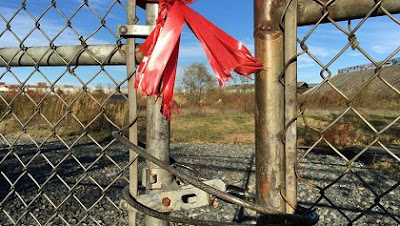 For 150 years, New Jersey manufactured chemicals and products that became familiar fixtures in homes: charcoal and lighter fluid, plastic, guns and silk. It’s the job of the state’s Department of Environmental Protection to ensure that New Jersey’s industrial past isn’t affecting the health of residents today.
But an investigation by WNYC finds most of the state’s poorest residents are living near a contaminated site with no plan in place to clean it up. And it’s not entirely clear whether anybody even knows with certainty what the risks are.
WNYC’s Findings
According to an analysis by WNYC’s Data News Team, 89 percent of New Jerseyans live within a mile of a contaminated site. Most of those sites are in the process of being cleaned up, which can take years.
But our investigation found 1,464 of the state’s 14,066 known contaminated sites don’t have any clean-up plan in place. Many sites have sat orphaned and polluted for years, and they are disproportionately found in low-income communities.
Months ago, the state Department of Environmental Protection, the DEP, told WNYC that the sites with no clean-up plan were mostly abandoned properties like old gas stations and former dry cleaners where the state couldn’t find the owners.
But WNYC went through the list and knocked on doors, and we found open, functioning businesses and institutions — including a state prison, hospitals, police and fire stations, churches, and schools — all of which have no plan in place to clean up contamination.
“This is exactly what we said was going to happen,” said advocate Ana Baptista. She grew up next door to a steel drum factory in Newark’s Ironbound neighborhood and now is an environmental policy professor at The New School. “Years ago people were screaming at the state that there were these loopholes.”
The state is no longer responsible for overseeing most of New Jersey's contaminated sites.
MORE
Posted by AgentOrangeZone at 11:20 AM