We update our meetings regularly on the Town Hall Meeting Calendar:
https://vva.org/AOTownHall.html

READ THE STORY
Representatives from the Government Accountability Office will be on island next week to talk to stakeholders regarding the reported incidents of Agent Orange exposure on Guam. 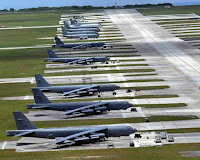 U.S. Navy Capt. Jeffrey Grimes, the chief of staff for Joint Region Marianas, confirmed the series of meetings during the 24th General Assembly of the Association of Mariana Islands Mayors, Vice Mayors, and Elected Municipal Council Members yesterday at the Guam Reef Hotel.
During the assembly, Santa Rita Mayor Dale Alvarez asked if the herbicide was ever used on island. Grimes acknowledged that there have been plenty of studies and discussions on the issue.
Grimes said he received a phone call yesterday confirming the GAO team's visit.
"They will be here next week to further look on the discussions that are ongoing from the veterans and other people who have worked at Andersen (Air Force Base)," he said. "They will be interacting with the military. They will be interacting with the people, the government, and the Legislature."
Agent Orange was one of the defoliants – known as "rainbow herbicides" – used by the U.S. military as part of its herbicidal warfare program during the Vietnam War from 1961 to 1971. They were used to destroy bushes, trees and vegetation to deprive insurgents of cover and food crops, as part of a starvation campaign in the early 1950s, according to Post news files.
MORE
Posted by AgentOrangeZone at 10:54 AM No comments:

S. 1990, the Dependency and Indemnity Compensation Improvement Act of 2017

On October 19, 2017, Senator Jon Tester, Ranking Member of the Senate Committee on Veterans' Affairs, introduced S. 1990, the Dependency and Indemnity Compensation Improvement Act of 2017.
This bill would increase dependency and indemnity compensation (DIC) for surviving dependents and would lower the threshold of eligibility to allow certain survivors to receive this benefit who currently do not meet the requirements. This measure would:


Increases DIC so that the base rate is equal to 55 percent of the rate of compensation paid to a totally disabled veteran, making it more equitable with rates provided to federal civilian employee survivors.


Ease the 10-year rule for eligibility and replace it with a graduated scale of benefits that begins after 5 years and increases by percentage until reaching the full amount at the 10 year mark. If a veteran is rated as totally disabled for five years and dies as a result of a non-service-connected cause, a survivor would be entitled to 50 percent of total DIC benefits. This scale continues until the 10-year threshold and the maximum DIC amount is awarded.


Reduce the age allowed for a surviving spouse to remarry and maintain their benefits from 57 to 55, consistent with other Federal survivor benefit programs.
Posted by AgentOrangeZone at 10:44 AM No comments:

READ THE STORY
Just before dawn on Nov. 18, 1967, the men of the Army’s 266th Chemical Platoon
awoke to reveille and assembled in formation. The platoon was attached to the First Infantry Division, and the men were stationed at the division’s base, deep in the red-clay hills north of Saigon. 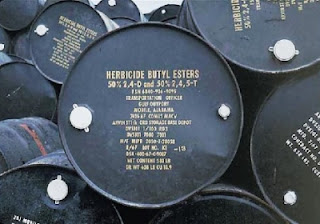 The men had a typically busy day ahead of them. Their tasks included obtaining 15 drums of Agent Orange to defoliate the base perimeter, firing mortars at an area just outside the base for an evening chemical drop, working at the bomb yard to prepare 24 drums of CS tear gas, making 48 white phosphorus fuses to detonate the drums, loading the drums onto a CH-47 cargo helicopter, and finally, that afternoon, dropping 24 drums of the gas from the helicopter’s rear hatch onto a target site. It was, by 1967, just another day in the life of the 266th Chemical Platoon, and in the American war in Vietnam — a war that was, in many respects, a chemical war.
It didn’t start that way. But as the conflict deepened, it became obvious that chemical weapons could play a critical role. In the case of the First Division, that realization came as the Viet Cong dug in north of Saigon with a network of underground bunkers and tunnels that were forbidding, dangerous spaces where conventional weapons would have limited effect. That fall, the 266th and other chemical platoons began training to use CS and other chemicals to support combat operations.
CS wasn’t the only tool in the platoon’s arsenal, and going after tunnels wasn’t its only mission. It handled anything related to chemicals, from spraying for mosquitoes to burning trash. It sprayed defoliants like Agent Orange and prepared napalm. Chemicals were everywhere, and their proliferation in the American war effort raised concerns that the United States was crossing a line in Vietnam, violating the 1925 Geneva Protocol’s prohibition against the first use of chemical weapons in war.
READ THE STORY
Posted by AgentOrangeZone at 10:52 AM No comments: