READ THE STORY
Following an 18-month scuffle under the Freedom of Information Act, the Pentagon has released records detailing serious contamination on Okinawa base land slated soon for return to civilian use. 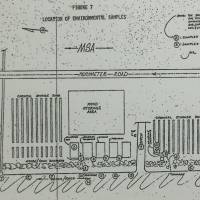 The FOIA release is believed to be the first time such comprehensive records regarding U.S. military contamination in Japan have been made public.
The 82-page package, which includes reports and memoranda from the U.S. Army, Navy and Marine Corps, reveals mass deaths of sea life, burials of toxic chemicals and the possible exposure of base workers at U.S. Marine Corps Camp Kinser in Urasoe, Okinawa Prefecture. The documents also highlight the frustrations of the U.S. military as it struggles to tackle contamination in the face of previous inept cleanups and bureaucratic obstacles.
The documents, dating from the 1970s to 1990s, focus on a 46,000 sq.-meter outdoor chemical storage area located on the southern shoreline of Camp Kinser, formerly known as the Machinato — or Makiminato — Service Area. According to the reports, among the substances stored were “retrograde shipments from Vietnam,” including insecticides, herbicides and solvents.
In 1975, a large “fish kill” on the nearby coast prompted the U.S. Army Pacific Environmental Health Engineering Agency to conduct surveys of the sea and soil. The results “indicated high concentration of chlordane, DDT, malathion, dioxin and polychlorinated biphenyl.” 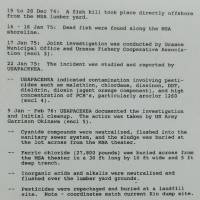 The pesticides, chlordane and DDT, have both been banned due to health risks; dioxins and PCBs have long been recognized as harmful, and can remain dangerous for decades when buried.
Subsequent tests on Camp Kinser in 1977 also revealed high levels of carcinogenic heavy metals, including lead and cadmium.
According to the FOIA-released records, in an attempt to mitigate the contamination, large quantities of the stockpiled chemicals were buried or “flushed” on the base — including sludge from neutralized cyanide compounds, inorganic acids and alkalis and 12.5 tons of ferric chloride. Pesticides were also buried at Camp Hansen in the town of Kin.
However, the reports suggest these cleanup efforts were unsuccessful. In the mid-1980s, during a civilian landfill project, toxins again seeped from the base, resulting in the further death of marine life.
Documents written by military personnel in the 1980s and 1990s reveal their dissatisfaction with predecessors’ remediation attempts. Labeling the surveys “superficial” and “cursory,” they criticize the lack of follow-up checks and the failure to record whether the contaminated soil was ever removed from the installation.
MORE
Posted by AgentOrangeZone at 5:42 PM No comments:

REGISTER NOW
We invite you to attend this free webinar and help spread the word to all those who might be interested.
This webinar series is intended for the general public, but mental health professionals are more than welcome to attend (sorry, no CE).
About this webinar: Live 45-minute presentation, followed by a brief Q&A session. No fees, no phone. Just log in and turn up the speakers on your computer. Then watch, ask questions, and learn. 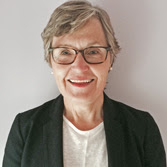 Dr. Becky Hammett will discuss anxiety, autism spectrum disorder, and children. She has more than two decades of experience working with children and adolescents, and she has worked mostly with young people who have anxiety disorders.
Becky Hammett, PsyD
Founder of the Child Anxiety Center
St. Paul, Minnesota Clinicians and other mental health professionals are welcome to attend, but we cannot offer CE. This webinar series is intended for the general public.

Posted by AgentOrangeZone at 5:37 PM No comments:

Act NOW contact your Senator in support of S.2921, the Veterans First Act

Your Senators and Members of Congress have but a few more days before they recess until after November 8th, Election Day. Yet it is critical that your Senators are given the opportunity by leadership for an up-or-down vote on S. 2921, the Veterans First Act.
This bill, fathered by Senator Johnny Isakson (R-Georgia), passed unanimously in the Senate Veterans' Affairs Committee, which he chairs. It embraces several provisions -- several very important provisions -- for veterans and our families, including the expansion of the caregiver program in the VA, funding to enable the VA to move forward expeditiously on fulfilling its obligations to assist homeless veterans at the West Los Angeles VAMC campus, and funding to enable the VA to enter into leasing agreements for several much needed community-based outpatient clinics, or CBOCs.
Most important, however, is that S. 2921 contains the Toxic Exposure Research Act (S. 901). Passage of this bill is VVA's highest legislative priority, not for us but for our children and their children. We need research to connect, to indicate a positive association, between a father or mother's exposure to toxic substances while in uniform and health conditions -- birth defects, cancers, learning disabilities -- in our offspring.
It's critically important we get this bill enacted NOW.
44 Senators have cosponsored the bill.