Monsanto CEO on debate over GMO and food labeling

http://www.cbsnews.com/videos/monsanto-ceo-on-debate-over-gmo-and-food-labeling/
Genetically modified organisms have been part of our diet for years. The Grocery Manufacturers Association says up to 80 percent of processed food sold in the U.S. is genetically modified and mostly unlabeled. Monsanto, one of the world’s largest producers of genetically modified seeds, is committed to innovation in agriculture, but critics say it should be more transparent. Monsanto CEO Hugh Grant joins “CBS This Morning” to address the ongoing debate over GMOs and questions surrounding their herbicide, Roundup. 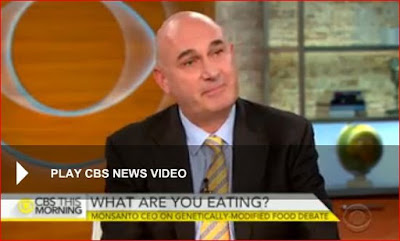 
Unfortunately  you will have to suffer through a 30 second commercial for Estee Lauder before the video begins. Use that time to take some deep breaths before listening to Monsanto's CEO Hugh Grant defend his company.
Posted by AgentOrangeZone at 4:59 PM