http://www.chicagotribune.com/news/watchdog/ct-gmo-crops-pesticide-resistance-met-20151203-story.html
When Monsanto genetically engineered corn and soybeans to make them immune to its best-selling weedkiller, the company pitched the technology as a way to reduce overall use of herbicides and usher in an environmentally friendly era of farming.
Instead of relying on older, more harmful chemicals, farmers could douse their fields with Roundup, a product that Monsanto once advertised as less toxic than table salt.
Two decades later, overuse of Roundup has spawned weeds that can survive spraying to grow 8 feet tall with stems as thick as baseball bats. To kill those so-called superweeds, chemical giants are giving the next wave of genetically modified crops immunity to the weedkillers of generations past.


The technology that was supposed to make those older herbicides obsolete soon could make it possible for farmers to use a lot more. 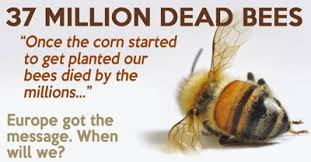 For use on its new genetically engineered corn and soybeans, Dow Chemical Co. is reviving 2,4-D, a World War II-era chemical linked to cancer and other health problems.
If these crops are widely adopted, the government’s maximum-exposure projections show that U.S. children ages 1 to 12 could consume levels of 2,4-D that the World Health Organization, Russia, Australia, South Korea, Canada, Brazil and China consider unsafe.
The U.S. Environmental Protection Agency had considered that exposure dangerous for decades as well. But the Obama administration’s EPA now says it is safe to allow 41 times more 2,4-D into the American diet than before he took office.
To reach that conclusion, the Tribune found, the agency’s scientists changed their analysis of a pivotal rat study by Dow, tossing aside signs of kidney trouble that Dow researchers said were caused by 2,4-D.


The EPA scientists who revised that crucial document were persuaded by a Canadian government toxicologist who decided that Dow — a company that has a $1 billion product at stake — had been overly cautious in flagging kidney abnormalities that she deemed insignificant.
When Dow later published this study, the company’s scientists likewise dismissed their earlier concerns and changed the most important measure of the chemical’s toxicity so it agreed with the EPA’s less stringent view.


These decisions paved the way for the EPA to approve Dow’s weedkiller Enlist Duo last year and reassure the public that a surge in 2,4-D use wouldn’t hurt anyone.
Girding that reassurance are two calculations: How much of the herbicide is safe for human health, and how much will Americans wind up consuming? There are ways to tweak each of those risk calculations. With 2,4-D, the Tribune found, the EPA’s math favored a dramatic increase in the weedkiller.
MORE
Posted by AgentOrangeZone at 4:46 PM