Water near Arizona Air Force base is tainted in latest case

PHOENIX (AP) — The U.S. Air Force says it will be distributing bottled water to thousands of residents and business owners near its base in suburban Phoenix until at least April, marking the latest case of chemicals from military firefighting efforts contaminating the water supply in a nearby community. 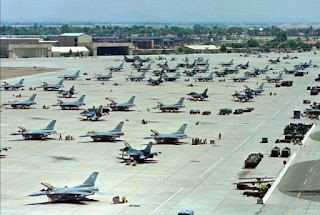 Luke Air Force Base announced this month that studies showed high levels of contaminants had affected drinking water for about 6,000 people in roughly 1,600 homes as well as a few neighboring businesses.

A contractor is scheduling deliveries of drinking water to the homes of people who picked up their first bottles this week, said Sean Clements, chief of public affairs for the 56th Fighter Wing at the base. Those deliveries will go on until a long-term filtration facility can be set up in April, Clements said Thursday.

The base has recommended people use bottled water for drinking and cooking but deemed tap water safe for bathing and laundry.

Similar contamination tied to the use of firefighting foam has been found in water supplies near dozens of military sites in Arizona, Colorado and other states and has triggered hundreds of lawsuits. Growing evidence that it's dangerous to be exposed to the chemicals found in the foam has prompted the U.S. Environmental Protection Agency to consider setting a maximum level for those chemicals in drinking water nationwide.

But they aren’t regulated now, meaning the base can't be punished even though the EPA says the chemicals stay in the body for long periods and may cause adverse health effects.

The Arizona Corporation Commission, which regulates utilities, is scheduling an emergency meeting next week with five water companies to discuss concerns about the contamination, said Caroline Oppleman, spokeswoman for the Arizona Department of Environmental Quality.

Posted by AgentOrangeZone at 2:11 PM