a Message from Paul Sutton

The People vs. Agent Orange documentary will be screening from March 5th to the 18th on the virtual cinema platforms of 37 cinemas around the country.  You can access the film’s link at: https://www.thepeoplevsagentorange.com/screenings-1

The film, which has already won two major awards including the Jury Prize at the Eugene Environmental Film Festival, takes a deep dive into Operation Ranch Hand in Vietnam, the contamination of US troops and the illnesses and deformities that were passed down to their children and now grandchildren. 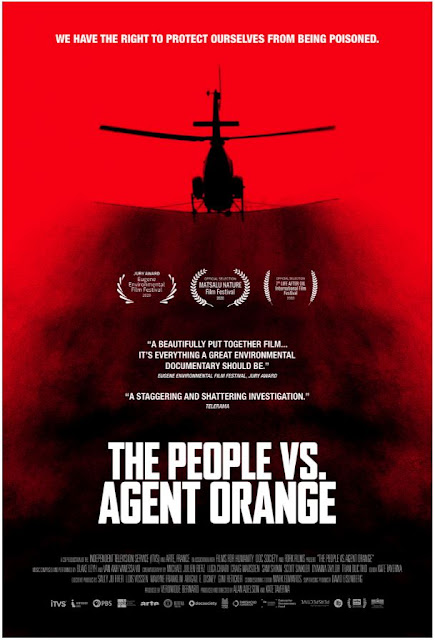 The film describes Agent Orange as a weapon of mass destruction. The character-driven and investigative documentary goes on to detail how the forestry industry in America's Pacific northwest, and agriculture elsewhere, began using Agent Orange and other toxic herbicides even after the use of them was halted in Vietnam.

Two heroic women, one Vietnamese, the other American, crusade to advance the movements to help the victims and hold the American chemical manufacturers accountable.

The film's tag line, on the poster here, declares "We have the right to protect ourselves from being poisoned."  That right is still widely denied to today's victims of toxic herbicides and to those who will sadly fall victims as well because of the epigenetic damages of the chemicals.

Veterans and environmental groups are offering discounted "tickets" for people to book viewings in their homes and in organizational settings. There are extensive details on the film's website including a list through which folks can choose what theater they would like to support with their bookings, how to request discounts, and to view related panels involving veterans, scientists and community activists.

Susan Hammond, the founder and Executive Director of the War Legacies Project, is working with us as the film's outreach and impact director.  We are organizing community-based forums to be recorded and posted on the film's website as the program of cinema screenings continues.

I have not been as moved by any documentary film as I was by this one. Despite nearly 45 years of involvement in advocacy and activism on all matters related to herbicide exposure, primarily exposure in Vietnam to our troops and the Vietnamese; I have unfortunately paid little attention to exposures here in the US. That, despite a huge, never-ending exposure in Newark and other places along the Passaic River here in NJ.

Yes, I knew of the exposures in Oregon and other places in the Pacific northwest. I even met and talked with Carol Van Strum at an Agent Orange conference in Roseburg, OR in 2003.

This film needs to be seen by everyone in the world, especially in the US. Folks have no idea what toxic exposures they live with, day in and day out, especially schoolchildren, because they are our future and they need to know what our generation has done to our earth.

I was particularly taken by the juxtaposition of the Oregon exposures and those in Vietnam. You only need one visit to a Peace Village in Vietnam to know what we did to that country. And, coupled with the exposures in the US, we all need to become aware of the dangers of these on-going exposures.

I’ve had the signal honor of being able to preview this riveting film. This film will be in my mind and dreams for months to come.

Posted by AgentOrangeZone at 12:33 PM