READ THE STORY
Veterans exposed to toxic substances during their military service could qualify for additional care and benefits from the Department of Veterans Affairs under landmark legislation reintroduced in Congress this week. 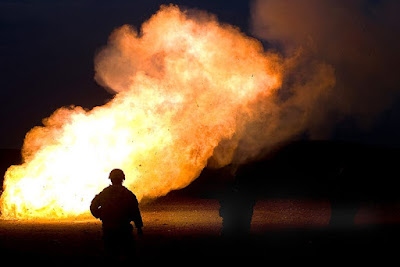 The Toxic Exposure in the American Military (TEAM) Act creates sweeping mandates for VA to further research, track and care for eligible veterans who fall ill because of exposure to toxic substances during service -- perhaps the most comprehensive legislation on military toxic exposures ever introduced in Congress.

A 29-year-old Marine is dying of a rare brain cancer. Burn pits caused it, his family says.

The TEAM Act was introduced by Sen. Thom Tillis, R-N.C., who represents one of the largest populations of troops and veterans in the country, including the largest Army base in the world, Fort Bragg. Sen. Maggie Hassan, D-N.H., who represents Pease Air Force Base where troops and their families have been exposed to high levels of "forever chemicals" including PFAS, cosponsored the bill at its introduction.

Last year, the bill passed out of the Senate Veterans Affairs Committee, a key endorsement, but did not receive a vote on the Senate floor before the end of the year, meaning it had to be reintroduced in 2021. Tillis said in a press conference on Tuesday he believed the reason the bill didn't pass last year was because of its late introduction, and now he and Hassan are working to partner with House members on a companion bill, and that additional amendments and provisions are on the table.

"We're trying to put a framework in place that lets us end mistakes we made dating back to Agent Orange," Tillis said. "When a veteran is experiencing an illness, they've got so many other distractions on their mind, we should not make it difficult for them to get the care they deserve."