READ ALL ABOUT IT!
The Battle of Dien Bien Phu (French: Bataille de Diên Biên Phu) was a climactic confrontation of the First Indochina War that took place between 13 March and 7 May 1954. It was fought between the French Union's French Far East Expeditionary Corps and Viet Minh communist revolutionaries. 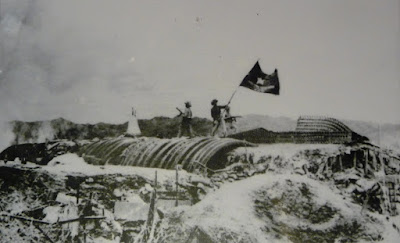 It was, from the French view before the event, a set piece battle to draw out the Vietnamese and destroy them with superior firepower. As a result of blunders in French decision-making, however, the French began an operation to insert, then support, the soldiers at Điện Biên Phủ, deep in the hills of northwestern Vietnam. The operation's purpose was to cut off Viet Minh supply lines into the neighboring Kingdom of Laos (a French ally), and draw the Viet Minh into a major confrontation in order to cripple them. The plan was to resupply the French position by air, and was based on the belief that the Viet Minh had no anti-aircraft capability. The Viet Minh, however, under General Võ Nguyên Giáp, surrounded and besieged the French. They brought in vast amounts of heavy artillery (including anti-aircraft guns) and managed to move these bulky weapons through difficult terrain up the rear slopes of the mountains. The Viet Minh were then able to dig tunnels through the mountain, and emplaced the artillery pieces overlooking the French encampment.
In March, a massive artillery bombardment by the Viet Minh ensued. The strategic positioning of their artillery made it nearly impervious to French counter-battery fire. Tenacious fighting on the ground ensued, reminiscent of the trench warfare of World War I. At times the French repulsed Viet Minh assaults on their positions while supplies and reinforcements were delivered by air. As key positions were overrun, the perimeter contracted and the air resupply on which the French had placed their hopes became impossible. As the Viet Minh antiaircraft fire took its toll, fewer and fewer of those supplies reached the French. The garrison was overrun in May after a two-month siege, and most of the French forces surrendered. A few of them escaped to Laos. The French government in Paris then resigned, and the new Prime Minister, the left-of-centre Pierre Mendès France, supported French withdrawal from Indochina.
The Battle of Điện Biên Phủ was decisive; the war ended shortly after and the 1954 Geneva Accords were signed. France agreed to withdraw its forces from all its colonies in French Indochina, while stipulating that Vietnam would be temporarily divided at the 17th parallel, with control of the north given to the Viet Minh as the Democratic Republic of Vietnam under Ho Chi Minh, and the south becoming the State of Vietnam, nominally under Emperor Bảo Đại, preventing Ho Chi Minh from gaining control of the entire country.
Posted by AgentOrangeZone at 8:07 AM