Vietnamese and US author co-operate on Agent Orange book

READ THE STORY
The 258-page book, which was released in English by the publisher G. Anton in the US in early 2018, and in Vietnamese by the Thế Giới Publishing house in Vietnam in August, is the result of endless efforts by the two authors in seeking documents and interviewing AO victims, officials, veterans and local people in Vietnam and the US.
“It’s been long and hard working days for two of us. We just try to tell the story of dioxin and AO victims as well as the disastrous consequences of the toxic chemical,” Son said as he introduced the book in Da Nang early October. 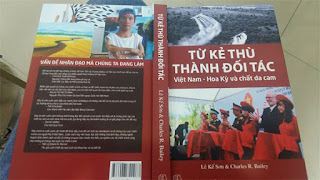 “Da Nang was not a major site for the dioxin-spraying campaign during the American war in Vietnam, but the airport of Da Nang had been contaminated with dioxin as it was a warehouse for the chemical,” Son said.
“Many people in the city and neighbouring provinces had contact with dioxin in the jungle when they joined the Army of Vietnam during the war, and their descendants consequently suffered birth defects due to the dioxin,” he said.
Son said the 10-chapter book aims to call for dioxin-producing companies to accept more responsibility for easing the pain of AO victims both in Vietnam and the US.
He hoped that the US and Vietnam would sign an agreement for long-term support for disabled persons and AO victims.
Dr Son, who worked for the Việt Nam National Steering Committee for Agent Orange Impact Relief, said Agent Orange/dioxin was a point of  bitterness between the US and Vietnam in the past, but the two sides have come closer together in dealing with dioxin contamination in Da Nang’s airport and Bien Hoa Airport. They plan to work on other hot spots in Vietnam in the near future.
He said many efforts had been made by both sides to ease the harmful effects of herbicides containing dioxin and to help AO/dioxin victims.
Charles Bailey, an advisor on AO in Vietnam, said: “We thought we could write the book in 18 months but it took three years. We wanted our book to be a complete and comprehensive source of information on Agent Orange/dioxin. We believe we have achieved this.”
Posted by AgentOrangeZone at 8:17 AM