READ THE STORY
A senior official with the Department of Veterans Affairs removed from his office a portrait of a Confederate general and famed Ku Klux Klan grand wizard after a Washington Post reporter asked him about it, the paper reported Tuesday.
According to the Post, David J. Thomas Sr., a deputy executive director of the VA’s Office of Small and Disadvantaged Business Utilization, removed the portrait from his Washington, D.C. office after the reporter told him that its subject, Lt. Col. Nathan Bedford Forrest, was a slave trader and the first grand wizard of the Ku Klux Klan. 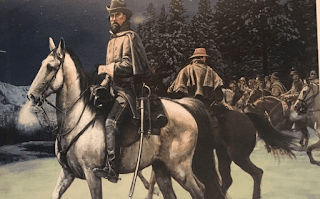 “It was just a beautiful print that I had purchased, and I thought it was very nice,” Thomas, who has worked as a civil servant within the VA since 2013, told the Post.
He also said that he only knew of Forrest as a “Southern general in the Civil War.”
Nine of the 14 managers who work in Thomas’s staff are black, according to the newspaper. At least three of his employees have opened racial discrimination cases against the senior official.
A lawyer representing two of the employees in the discrimination case told the Post that Thomas’ choice of portrait is an example of his attitude toward black people.
“You don’t hire someone who puts a picture of the Klan in his office unless” you’re racially insensitive, the Post reported attorney John Rigby as saying.
The Veterans Affairs chapter of American Federation of Government Employees launched a petition for the removal of the portrait after a union representative recognized the portrait’s subject as a founding member of the KKK during a meeting in Thomas’ office.
Posted by AgentOrangeZone at 9:15 AM