READ THE STORY
As tens of thousands of so-called “Blue Water” Navy veterans wait for Congress to act, 45 House Members are calling on the Senate to advance crucial legislation to expand much-needed care to them.
In a letter sent to Sen. Johnny Isakson (R-Ga.), Rep. Tim Walz (D-Minn.) and 44 other House lawmakers urged the Senate VA Committee chairman to pass the Blue Water Navy Vietnam Veterans Act, “so that the legislation can be brought to the Senate floor as soon as possible.”

43 House Democrats signed on to the letter, including Walz, with Reps. Walter Jones (N.C.), and Mike Bishop (Mich.) as the Republican signatories. 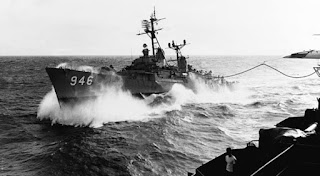 “It is a very sad reality that every day of delay means there are fewer Blue Water Navy veterans who earned and deserved compensation and Department of Veterans Affairs (VA) care for their illnesses,” the letter reads.
“As veterans’ advocates, we have all heard from frustrated veterans who say it sometimes looks to them as if the Congress and the VA are denying benefits just waiting for them to die.  Unless Congress passes this bill, it will be hard to argue against that notion.”
The House unanimously passed the bill in June, which represents “the first time these veterans saw any real progress from their government,” says Walz.
“However, it’s extremely disappointing to see the legislation lose traction in the Senate, presumably because the Trump Administration has come out in strong opposition to the bill, not based on policy, but because it simply does not want to invest the money it would take to do right by these veterans.
The legislation would finally grant a presumption of exposure to Agent Orange for sailors who served in territorial waters off the coast of Vietnam; U.S. service members who served on-the-ground in Vietnam during the war already have that.
It would also allow these veterans to receive expedited care and other VA benefits if they’re suffering from illnesses connected to their exposure.
Posted by AgentOrangeZone at 10:29 AM