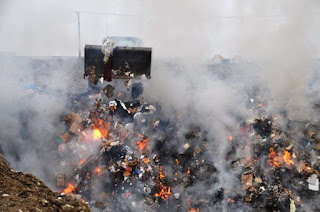 TARPON SPRINGS, Fla. -- After 10News revealed a possible treatment for veterans exposed to burn pits, there's finally some action for tens of thousands of suffering vets.

Burn pit exposure is an epidemic with many consequences that veterans deal with years after returning from Iraq and Afghanistan. Following a story in January, U.S. Rep. Gus Bilirakis (R - New Port Richey) drafted legislation to help get veterans the health care and coverage they need right away.
Joe Hernandez was exposed to toxic burn pits in Iraq and Afghanistan when the military burned waste like chemicals, ammunition, oil and other items they had to get rid of.
Years after coming home, Hernandez noticed he was feeling weak.
"If I can't breathe or I don't feel well because I can't breathe, then what was the point of coming back alive," he said.
Hernandez is among thousands of veterans who have signed the VA's burn pit registry.
"I mean some of the stories are so very sad," he said. "These are our heroes we're talking about. They need health care immediately and they need to get their disability payments approved immediately."
Bilirakis drafted legislation that would give veterans presumptive status, making them eligible for health care and coverage right away.
Posted by AgentOrangeZone at 12:08 PM