READ THE STORY
Two Army combat veterans support federal legislation would “direct the Secretary of Defense to include in periodic health assessments, separation history and physical examinations, and other assessments an evaluation of whether a member of the Armed Forces has been exposed to open burn pits or toxic airborne chemicals,” according to the text of the bill. 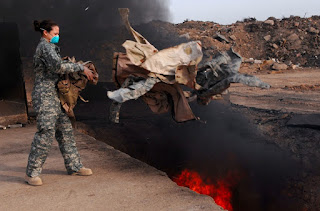 The legislation, H.R. 5671, Burn Pits Accountability Act, introduced by Rep. Tulsi Gabbard (D-Hawaii), an Iraq veteran, and cosponsored by Rep. Brian Mast (R-Fla.), an Afghanistan veteran and double amputee, addresses this important topic - especially to our veterans of the wars in Iraq and Afghanistan.
The bill seeks to address a problem experienced by many of my fellow veterans of Iraq and Afghanistan who have been exposed to open burn pits and other toxic chemicals while deployed and who have themselves later become afflicted with rare cancers and other health issues. These veterans, when addressing their health issues with the VA, have been consistently told it is - like was said for many years with regard to veterans exposed to Agent Orange - not supported by science.
The Burn Pits Accountability Act would evaluate the exposure of U.S. servicemembers and veterans to open burn pits and toxic airborne chemicals by:
Requiring the Secretary of Defense to record whether servicemembers have been “based or stationed at a location where an open burn pit was used or exposed to toxic airborne chemicals, including any information recorded as part of the Airborne Hazards and Open Burn Pit Registry,” in Periodic Health Assessments (PHAs), Separation History Physical Examination (SHPEs), and Post-Deployment Health Assessment (PDHAs).
Posted by AgentOrangeZone at 12:17 PM