READ THE STORY
WOOLWICH — The Township of Woolwich is calling on the federal government to help clean up Agent Orange contamination in the Canagagigue Creek.
The dioxins and furans in the creek are the fallout from production of the herbicide at the Uniroyal plant in the 1960s and now politicians say it's about time the Canadian government stepped up to take its responsibilities. 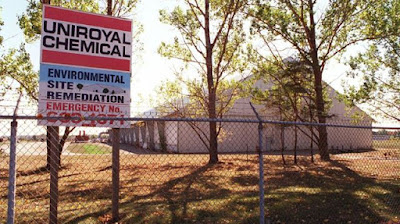 "I don't think you should make a small municipality take care of a problem that is bigger than itself," Mayor Sandy Shantz said.
Uniroyal Chemical Ltd. was contracted by the U.S. government to produce Agent Orange in the 1960s. The herbicide contains the toxic chemical dioxin and was used by the U.S. government during the Vietnam War. It can cause cancer and other serious health problems.
Politicians and residents say the government failed in its duty of care to oversee pesticide production and enforce legislation that might have prevented the contamination at the time.
Also, the township argues, neither Environment Canada nor Health Canada has addressed the legacy of Agent Orange production here.
What further frustrates Dick Jackson, chair of a township committee which oversees cleanup of the local water supply and creek, is that the Canadian government has assisted with Agent Orange site investigations in Vietnam. The U.S. has started to help clean up hot spots there, such as former military bases where the chemical was stored.
"There's an enormous amount of concern and frustration, huge frustration, in the community," Jackson said. "The fact that the Canadian government would help the Vietnamese and not do anything here in the community … it's rather cause for puzzlement.
"We don't understand what it is that has happened to us in the community."
MORE
Posted by AgentOrangeZone at 3:17 PM