READ THE STORY
A prosthetic leg. A scarred face. A burned hand. When we think of the wounds our soldiers endure, we think of injuries we can see. But sometimes these wounds go unseen and, too often uncared for.
During the Vietnam War, the U.S. sprayed 80 million liters of Agent Orange, contaminating water and exposing more than two million members of the military.
After being exposed to this toxin, Vietnam vets came home with nerve, skin, digestive and respiratory disorders. By the thousands, veterans turned to hospitals for help. But it took the government years to recognize that there was a link between Agent Orange and the devastating health effects on our soldiers. So, veterans had to wait to get the care they desperately needed and clearly earned.
Today we have a new Agent Orange: Burn pits. 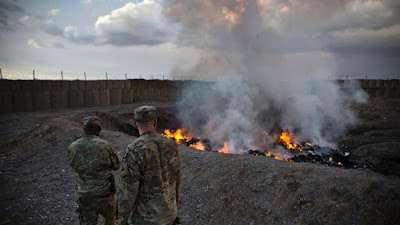 At military sites across Iraq and Afghanistan, burn pits are used for waste disposal. Old batteries, aerosol cans, tires, dead animals, and even human waste are tossed into the pit and set ablaze, sometimes aided by serious fire accelerants like jet fuel. Burn pits represent a shortcut to waste disposal in the Middle East, where lacking infrastructure means there are few alternatives for trash disposal.
The volumes and types of materials vary by site, but the Department of Defense has estimated that between 65,000 and 85,000 pounds of solid waste are burned each day at large bases. One Joint Base burned up to 147 tons of waste per day as recently as the summer of 2008. The open-air pits would frequently burn 24 hours a day. Soldiers are, and have been, been exposed to them in a big way. And while they are now being replaced with incinerators and landfills, that exposure has begun raising serious health concerns.
Melissa Gillett was a member of the 148th Fighter Wing based in Duluth, Minnesota. Melissa got into the National Guard with the intention on staying in for 20 years. That changed after her deployment to Afghanistan and exposure to burn pits. Melissa has experienced a host of negative health effects like sinus and respiratory issues. She has been diagnosed with asthma and sinusitis. Because of her breathing issues, Melissa was unable to pass her fitness test and can no longer serves in the National Guard.
Stories like Melissa’s are all too common. During sustained operations overseas, many North Carolina-based service members were directly exposed to burn pits for extended periods of time.  Especially in the early stages of engagements in Iraq and Afghanistan, forward operating bases relied heavily on burn pits, inundating Marines from Camp Lejeune and soldiers from Fort Bragg with smoke, debris, and lingering particle dust that carried along a toxic mix from the burn pits.
When a veteran’s wounds aren’t visible, providing the proof necessary for a claim with the VA can be burdensome. But it shouldn’t be – we’ve learned that much from experience.
MORE
Posted by AgentOrangeZone at 7:37 AM