What Lessons Can Vietnam teach Okinawa about U.S. Military Dioxin?

http://www.globalresearch.ca/what-lessons-can-vietnam-teach-okinawa-about-u-s-military-dioxin/5507309
In December 2015, Urasoe City pledged to conduct a survey of former base employees to ascertain the extent of contamination at Camp Kinser, a 2.7 square kilometer US Marine Corps supply base located in the city.1 Urasoe’s director of planning, Shimoji Setsuo, announced that the municipality would work with prefectural authorities to carry out the investigation and he would also request funding from the national government. This is believed to be the first time that such a large-scale survey of former base workers has been launched in Japan. 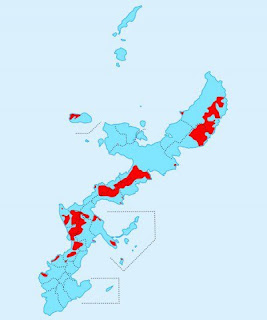 Triggering Urasoe’s decision were Pentagon documents released under the U.S. Freedom of Information Act (FOIA) revealing serious contamination at Camp Kinser.2 According to the reports, military supplies returned during the Vietnam War leaked substances including dioxin, polychlorinated biphenyls (PCBs) and insecticides within the base, killing marine life. Subsequent clean-up attempts were so ineffective that U.S. authorities worried that civilian workers may have been poisoned in the 1980s and, as late as 1990, they expressed concern that toxic hotspots remained within the installation.
Following the FOIA release, United States Forces Japan (USFJ) attempted to allay worries about ongoing contamination at Camp Kinser. Spokesperson Tiffany Carter told The Japan Times that “levels of contamination pose no immediate health hazard,” but she refused to provide up-to-date environmental data to support her assurances. Asked whether USFJ would cooperate with Urasoe’s survey, Carter replied that they had not been contacted by city authorities. She also ruled out health checks for past and present Camp Kinser military personnel.3
Last year, suspicions that Camp Kinser remains contaminated were heightened when wildlife captured by Japanese scientists near the base was found to contain high levels of PCBs and the banned insecticide DDT.4
MORE
Posted by AgentOrangeZone at 7:52 AM