http://pilotonline.com/news/military/veterans/veterans-affairs-again-denies-agent-orange-benefits-to-navy-vets/article_55e837f4-0607-5bed-aabf-7232b9bd43d0.html
The U.S. Department of Veterans Affairs has once again turned down an effort by Navy veterans to get compensation for possible exposure to Agent Orange during the Vietnam War.
In a document released Friday, the VA said it would continue to limit benefits related to Agent Orange exposure to only those veterans who set foot in Vietnam, where the herbicide was sprayed, and to those who were on boats in inland rivers.
The VA compensates these veterans for a litany of associated illnesses, including diabetes, various cancers, Parkinson’s disease, peripheral neuropathy and a type of heart disease.
Advocates for some 90,000 so-called Blue Water Navy veterans who served off the coast of Vietnam have been asking the VA for more than a decade to broaden the policy to include them. They say they were exposed to Agent Orange because their ships sucked in potentially contaminated water and distilled it for showering, drinking, laundry and cooking. Experts have said the distillation process could have actually concentrated the Agent Orange, which contained the toxic chemical dioxin and was used to kill vegetation and deny enemy cover. 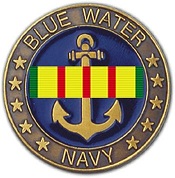 The U.S. Court of Appeals for Veterans Claims last April struck down VA rules that denied compensation for sailors whose ships docked at certain harbors in South Vietnam, including Da Nang. Those ports, the court determined, may have been in the Agent Orange spraying area. The court ordered the VA to review its policy.
On Friday, the VA largely stood by its policy and again asserted that there’s no scientific justification or legal requirement for covering veterans who served off the coast.
“Environmental health experts in VA’s Veterans Health Administration have reviewed the available scientific information and concluded that it is not sufficient to support a presumption that Blue Water Navy Veterans were exposed to Agent Orange,” the VA said in a fact sheet.
U.S. Sen. Richard Blumenthal, D-Conn., the ranking member of the Senate Veterans’ Affairs Committee, criticized the VA’s decision.
“Rather than siding with veterans, VA is doubling down on an irrational and inconsistent policy,” he said in a statement. “Veterans who served offshore and in the harbors of Vietnam were exposed and deserve the presumption of service connection for Agent Orange-related diseases.”
Blumenthal and others are seeking adoption of the Blue Water Navy Vietnam Veterans Act, which would ensure that all vets exposed to Agent Orange are compensated. The VA opposes the legislation, as it has several previous iterations dating back to 2008.
MORE
Posted by AgentOrangeZone at 8:13 PM