http://news.co.cr/transgenic-cotton-in-costa-rica-contains-traces-of-agent-orange/44333/
An attempt to plant transgenic cotton for research purposes in Costa Rica is being challenged in court. According to a news report recently filed by Carlos Arrieta Perez of online news daily El Pais, a legislator from Frente Amplio (Broad Front) and a few non-profit groups dedicated to environmental protection claim that the transgenic cotton seeds contain traces of Agent Orange. 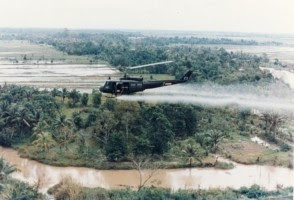 Legislator Edgardo Araya Sibaja filed a complaint before the Constitutional Chamber, known as Sala Cuarta, to stop transgenic cotton from being tested in Costa Rica. Most municipalities in our country have local ordinances that prevent the cultivation of genetically modified organisms (GMOs), but a handful of cantons that do not have such prohibitions have agricultural research farms where hybrids and transgenic crops can be tested.
The complaint filed before Sala Cuarta argues that the traces of Agent Orange found in the GMO cotton seeds violate the Cartagena Protocol on Biosafety. Legislator Araya believes that the cotton pollination process is impossible to contain, which means that insects could carry the harmful traces to native plant species nearby.
According to the United States Veterans Administration, Agent Orange refers to a blend of tactical herbicides the U.S. military sprayed in the jungles of Vietnam and around the Korean demilitarized zone to remove trees and dense tropical foliage that provided enemy cover. Herbicides were also used by the U.S. military to defoliate military facilities in the U.S. and in other countries as far back as the 1950s.
The U.S. Department of Defense developed these tactical herbicides specifically to be used in “combat operations.” The dioxin TCDD was an unwanted byproduct of herbicide production. Dioxins are pollutants that are released into the environment by burning waste, diesel exhaust, chemical manufacturing, and other processes. TCDD is the most toxic of the dioxins, and is classified as a human carcinogen by the Environmental Protection Agency.
Legislator Araya explains that GMO cotton contamination has already taken place in Costa Rica, specifically in 2005 and at the same research stations in Guanacaste where a batch is intended to be cultivated this time.
Posted by AgentOrangeZone at 1:47 PM