WASHINGTON, DC – U.S. Senator Gary Peters (MI) today announced he is cosponsoring the Blue Water Navy Vietnam Veterans Act of 2015, bipartisan legislation that would ensure Vietnam veterans who served aboard deep-water naval vessels, known as “Blue Water” veterans, are eligible to receive the disability and health care benefits they earned for diseases linked to exposure to Agent Orange. Under current law, only veterans who served on Vietnamese soil or aboard a craft in its rivers receive presumptive coverage of illnesses linked directly to Agent Orange exposure. 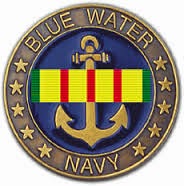 “Agent Orange has affected the health of thousands of servicemembers who fought in the Vietnam War, and it is unacceptable that some are being denied health care and disability benefits for diseases resulting from their military service,” said Senator Peters. “My office has heard from Michigan veterans affected by this issue, and I am proud to cosponsor this bipartisan, commonsense bill that will ensure Navy veterans who have fallen victim to Agent Orange-related conditions receive the long overdue care they have earned through their service.”
In 1991, Congress passed a law requiring the VA to provide presumptive coverage to Vietnam veterans with illnesses that the Institute of Medicine has directly linked to Agent Orange exposure. However, in 2002 the VA determined that it would only cover Veterans who could prove that they had orders for “boots on the ground” during the Vietnam War, excluding thousands of sailors who may have been exposed to Agent Orange while serving aboard Navy ships. The Blue Water Navy Vietnam Veterans Act of 2015 would clarify existing law so that Blue Water veterans would be fully covered by the VA if they served within the “territorial seas,” or approximately 12 miles offshore of Vietnam. The bill would make it easier for VA to process Vietnam War veterans’ claims for service-connected conditions and alleviate a portion of the VA’s backlog by extending presumptive coverage of Agent Orange benefits to these veterans.
A May 2011 report by the Institute of Medicine established several “plausible routes” for Agent Orange exposure through the water distillation process aboard Navy ships and through the air. In 2010, a study by the Institute of Medicine cited exposure to Agent Orange resulted in an increased chance of developing serious heart problems and Parkinson’s disease. A 1990 study by the Centers for Disease Control and Prevention (CDC) showed Vietnam veterans had a rate of non-Hodgkin's lymphoma 50 percent higher than the general population. Agent Orange is linked to a range of other diseases, including several blood and respiratory cancers, type II diabetes, prostate cancer and more.
In 2005, the VA’s former Director of Environmental Agents Service Dr. Mark Brown publicly acknowledged that there was no scientific basis for the exclusion of Blue Water Vietnam veterans, but the VA has continued to refuse these veterans presumptive benefits Congress initially intended. In his article in the Journal of Law and Policy, Dr. Brown wrote, “Science does not back up the VA’s policy on the Navy.”
Peters, a former Lt. Commander in the U.S. Navy Reserve, previously co-sponsored similar legislation in the U.S. House of Representatives, and has been a strong voice for Michigan service members and veterans in Congress. Earlier this year, Peters cosponsored the Clay Hunt Suicide Prevention for American Veterans Act, bipartisan legislation that was signed into law by the President earlier this year to provide additional resources to improve mental health care and suicide prevention programs for veterans.
MORE
Posted by AgentOrangeZone at 8:15 AM