The toxic vapors acted quickly against the Second Platoon of the 811th Ordnance Company, whose soldiers were moving abandoned barrels out of an Iraqi Republican Guard warehouse in 2003. The building, one soldier said, was littered with dead birds.
As the soldiers pushed the barrels over and began rolling them, some of the contents leaked, they said, filling the air with a bitter, penetrating smell. Soon, many were dizzy and suffering from running noses and tearing eyes. A few were vomiting, disoriented, tingling or numb.
After the soldiers staggered outside for air, multiple detection tests indicated the presence of nerve agent. Others suggested blister agent, too. The results seemed to confirm the victims’ fear that they had stumbled upon unused stocks of Iraq’s chemical weapons.
From Camp Taji, where the barrels had been found, more than 20 exposed soldiers were evacuated in helicopters to a military hospital in Balad, where they were met by soldiers wearing gas masks and ordered to undress before being allowed inside for medical care.
“They drew a box in the sand and had armed guards and were like: ‘Do not get out of that box. Do not get out of that box,’ ” said Nathan Willie, a private first class at the time. “I was kind of freaked out.”
Since last fall, the United States military has acknowledged that American soldiers found thousands of abandoned chemical weapons in Iraq, and that hundreds of troops notified the military medical system that they believed they had been exposed to them. The military acknowledged the exposures after years of secrecy — and of denying medical tracking and official recognition to victims — only after an investigation by The New York Times. 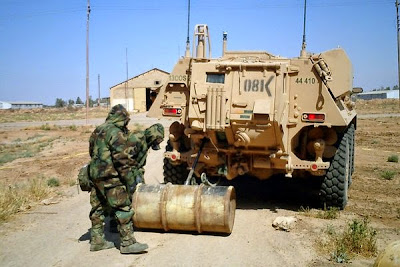 Even then, the affliction of the 811th Ordnance Company had quietly remained one of the unsolved mysteries of the Iraq war, and a parable of what several of the victims describe as the corrosive effects of the government’s secrecy on troop welfare and public trust.
Since the episode, several of the sickened soldiers have complained of health effects that they say may be linked to handling leaking barrels. But instead of finding the Army concerned or committed to their well-being, they faced years of shifting stories about what exactly had made them ill.
The Army, they said, at first suggested that they might have been exposed to the nerve agent sarin. Then it said that chemical warfare field detection tests were unreliable and that the liquid was most likely a pesticide or something else. Then it dropped the subject entirely.
Still, several of the victims suffered. But because the military’s records relating to the episode were classified, the victims said, they lacked the information to settle their gnawing worries or to give them the standing necessary to pursue medical care or disability claims.
Thomas S. Blanton, director of the National Security Archive, which advocates open government, said the government’s refusal to share its information was a case of the habits of secrecy trumping common sense.
“Soldiers exposed to something really dangerous cannot find out what it was because ‘Sorry it’s classified’?” he said. “It’s creepy and it’s crazy.”
MORE
Posted by AgentOrangeZone at 9:21 AM