READ THE STORY
Veterans exposed to burn pits in Iraq and Afghanistan are begging government leaders and the public to keep paying attention to their crippling health problems.
“We write because these veterans are seriously ill, dying or have passed away, and more must be done,” a group of 700 veterans and family members with Burn Pits 360 wrote in an open letter to President Barack Obama on Thursday. “Many of us went to war able to run marathons, but now our health has deteriorated so much that we cannot hold down steady jobs.
“We are misdiagnosed. We are not getting the medical care we urgently need. We need you to act in this, your final year in office.”
The letter comes just days after a Government Accountability Office report found shortfalls in the Defense Department’s monitoring of burn-pit victims, and asks White House officials not to let the Pentagon and Department of Veterans Affairs “sweep us under the rug.”
It also calls for significant changes in how the National Airborne Hazards Open Burn Pit Registry is administered, to allow more families to record veterans’ post-service problems. 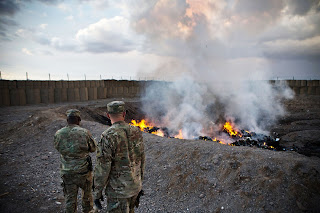 “We’re receiving death entries from these families on a weekly basis,” said Rosie Lopez-Torres, executive director of Burn Pits 360. “But the national registry now doesn’t allow you to input a death entry. So there is no record of (those veterans’) illnesses.”
Defense Department and Veterans Affairs officials have frequently cited the difficulty of linking troops’ illnesses to burn pits in Iraq and Afghanistan, given the undocumented nature of what was burned in each pit and just how much exposure individual veterans had.
More than 81,000 veterans and current service members are in the registry, reporting illnesses from respiratory fatigue to rare cancers and neurological disorders.

But Lopez-Torres said she has at least 5,000 more cases that aren’t included in that list, because of the reporting restrictions.
“The burn pits are this generation’s Agent Orange, but we are seeing deaths happen after three or five years, instead of decades later,” Torres said. “We cannot afford to wait for another delayed medical study, we need the president and Congress to recognize this crisis is happening now.”
MORE
Posted by AgentOrangeZone at 7:28 AM