http://www.esquire.com/news-politics/politics/news/a43261/agent-orange-vietnam-war-veterans/
One of my first beats as a reporter for an alternative newspaper in Boston was to cover the various issues of concern to the Vietnam veterans community in the late 1970s and early 1980s. This was when the federal government—and the traditional vets groups, damn them—were stonewalling the Vietnam guys and calling them losers and claiming that PTSD was a coward's dodge to get on the federal dole. (I heard all of these arguments. It is largely lost to history that the people who took the Vietnam veterans and their issues seriously were elements of what had been the antiwar movement—the people who ran the GI coffeehouses, the alternative press.) 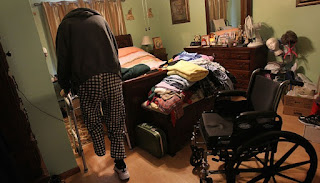 One of the most frustrating problems was the staggering panoply of physical ailments that arose from proximity to Agent Orange, a Dioxin-laden defoliant that some geniuses decided to ladle onto the landscape of southeast Asia to deprive the enemy of cover. People who got this poison sprayed on them got sick. People who handled it got sick. The government dealt with this crisis the way it dealt with all these crises at the time. It pretended it didn't exist. (Around this time, President Ronald Reagan closed all the VA's psychiatric outreach clinics. Noble cause!) One of my best friends in sportswriting served there in the Air Force, and his job was to load the Agent Orange onto airplanes. He died of liver cancer in 1991.
Consequently, any reference to Agent Orange sets the blog's Spidey-sense tingling. This week there were two of them. The first is a story about how our military efforts in Vietnam are still devastating the Vietnamese. The other is a story about how our government is still stumbling around in the dark.
Dioxin, the primary poison in Agent Orange, lingers in the food chain and in the water supply practically forever. Its effects continue long after initial exposure to it, as the people of Vietnam continue to learn to their horror.
MORE
Posted by AgentOrangeZone at 7:40 AM