http://www.scientificamerican.com/article/is-agent-orange-still-causing-birth-defects/
Vietnam insists that children are suffering today from the lingering effects of the infamous defoliant sprayed by U.S. forces decades ago. Scientists are undecided
Vietnamese doctors claim that the defoliant Agent Orange, sprayed during the Vietnam War, causes genetic defects in children and grandchildren of people who were exposed. 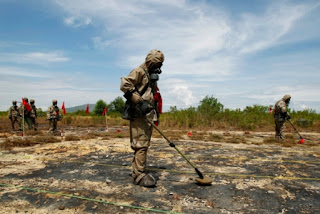 U.S. animal tests show that genetic damage from dioxin in Agent Orange can be passed on to offspring, but species vary widely in how susceptible they are. No human studies exist.
American scientists say Vietnamese research linking Agent Orange exposure to birth defects is flawed. Authorities there have not allowed American experts to conduct studies in Vietnam.
Without admitting guilt, Congress approved $21 million to help disabled people in Vietnam, but that country says the aid should be far higher.
After he was born with a cleft lip and palate and congenital heart disease, Danh (not his real name) spent his first month in an incubator struggling to breathe. He is now eight years old and thin as a rail. Danh has an endearing smile, but he can’t speak, and his mother, Lien (also a pseudonym), says he is mentally disabled. Recently he sat playing with toy cars at home in Da Nang, Vietnam, while Lien talked wearily about her son’s many needs.
I had been brought to Lien by a private American aid group called Children of Vietnam that works with poor families in Da Nang. We sat drinking tea in a simple room open to the street, chatting over the din of traffic. Family pictures hung next to a portrait of Ho Chi Minh, Vietnam’s communist revolutionary leader. Lien’s otherwise soft features hardened when I asked what she thought had caused her son’s disabilities. “Agent Orange did this!” she exclaimed through an interpreter, her eyes flashing with anger.
MORE

Posted by AgentOrangeZone at 8:15 AM