Bone marrow testing for bone marrow matches and blood donors are being sought to help a veteran who lives in the area. 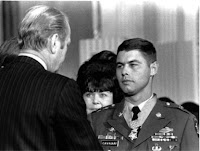 U.S. Army Sergeant Major (Ret) Jon R. Cavaiani, a  recipient of the Congressional Medal of Honor, was diagnosed with bone marrow cancer last February – the VA has acknowledged this is due to Agent Orange exposure, according to his cousin. He has received many blood transfusions and is now on his fifth round of chemotherapy.
On July 25, he will enter Stanford Cancer Medical Clinic for further testing to be sure he is fit for a bone marrow transplant.
Being tested for donorship is a simple cheek swab. If selected as a donor it is a same day surgery. The family is asking that anyone who is under 60 years old be tested as a donor. Cavaiani is also encouraging everyone to donate blood to “pay it forward” as he has used so much blood. Those who know him know he’s all about giving back. Blood donations may be made at the American Red Cross or Delta Blood Bank.
Cavaiani is a Vietnam War hero and was a prisoner of war for two years. He was presented with the Medal of Honor by President Gerald Ford during a ceremony on December 12, 1974.

For anyone interested in being a marrow donor, go to the website www.bethematch.org. Testing is a simple cheek swab test, and same day surgery for the donor.
The most current updates on his condition may also be found on the GiveForward website under his name.
For questions, contact Debby at debby@wildspiritranch.com.
Cavaiani is also listed for donations the GiveForward website at www.giveforward.com/fundraiser /3nl2/congressionalmedalofhonorrecipientjoncavaiani.
Posted by AgentOrangeZone at 1:17 PM