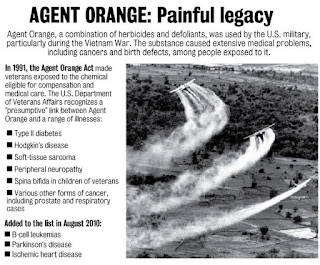 The San Bernardino County Department of Veterans Affairs is trying to find Vietnam veterans and their survivors who are unaware they are eligible for benefits related to Agent Orange exposure.
In 2010, the U.S. government began paying benefits to Vietnam veterans who had been exposed to Agent Orange and later developed certain heart ailments, B-cell leukemia and Parkinson’s disease, said Bill Moseley, director of the county’s veterans’ services office.
But he isn’t sure everyone got the word. He is particularly concerned about veterans who may have died from heart attacks before those changes were made. His office sent out a notice encouraging any Vietnam veterans who had ischemic heart disease — hardening of the arteries — or their survivors to inquire about possible benefits.
“My concern is if a veteran died from a heart attack 10 years ago, the widow may not be aware that she is entitled to survivor benefits,” Moseley said. “My heart tells me that there are some widows out there.”
The outreach is not part of a coordinated effort with other agencies, he said. It’s just something that has been nagging him for awhile, so he decided to put the word out.
Surviving veterans could be eligible for disability payments, he said. The payments would vary depending upon the severity of the illness.
Benefits for survivors are fixed, Moseley said. Widows or widowers of service members would receive $1,215 per month. Surviving dependent children are eligible for $301 per month. Survivors also might qualify for education benefits.
If a surviving family member applied for benefits before the federal VA recognized that Agent Orange exposure could have contributed to heart disease, and was denied, they may qualify for benefits retroactive to that filing date, Moseley said.
He said the heart-related benefits are specific to ischemic heart disease. Ailments such as hypertension, peripheral vascular disease and stroke are not eligible.
Those interested should call 909-387-5516 or 866-472-8387.
Moseley said he wants to spur some interest.
“I’m hoping we get a tidal wave, frankly.”
Posted by AgentOrangeZone at 9:58 AM