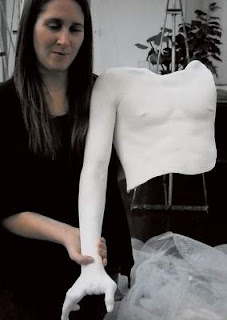 Their bodies are radically different than what we're used to seeing: Claws take the place of fingers, bones appear where they shouldn't, voids exist where there should be bone and flesh. But Keisha Luce of Franconia sees something extraordinary in them.

"I think there is something beautiful about each of the pieces," said the 32-year-old Dartmouth College graduate student, who traveled to Vietnam last year to make casts of Agent Orange victims. "And I think that's important because they are beautiful people. . . . They're not bodies of the grotesque or freak show bodies; they are different bodies.

"We went to Vietnam to change the landscape, and we changed the human body. . . . I think it's important to bear witness and recognize these bodies exist."

Luce spent three months in Vietnam, listening to the stories and casting the bodies of a handful of the estimated three million to four million Vietnamese people suffering from the mental, physical and genetic effects of Agent Orange exposure. Her project, called Sum and Parts, was on display for a time at the college.

For several years during the Vietnam War, America doused large areas of the country with a dioxin-based herbicide dubbed Agent Orange. The purpose was to kill heavy vegetation that gave Vietnamese soldiers cover and opportunity to ambush American troops. Though the war ended, Agent Orange lingered, in the ground, in the water and in the Vietnamese people. The result has been large incidences of cancer and at least three generations of children born with a variety of birth defects passed down from earlier generations.

Posted by AgentOrangeZone at 11:32 AM