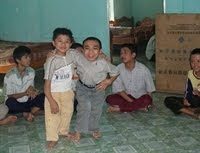 
The Vietnam Association for Victims of Agent Orange/Dioxin (VAVA) on October 6 received US$292,000 donated by the Greek Embassy in Vietnam, the Overseas Vietnamese Association in Russia and Viettel Corporation.

Greek Ambassador to Vietnam Platon Alexis Hadjimichalis said that after finishing his term in Vietnam he will persuade the Greek Government to continue support for Vietnamese Agent Orange victims. He added that in recent years the embassy has taken part in a wide range of activities to support Vietnamese AO victims. In the near future, the embassy will present 6,000 euro and 50 wheelchairs to the Ministry of Defence and 30 propaganda pictures taken during the war to the Vietnam Military History Museum to raise funds for AO victims.

The campaign aims to build 500 houses of gratitude and 55 care centres for AO victims, grant 1,100 scholarships and generate 1,100 jobs for children of AO victims. This year, VAVA will build three AO care centers.

An television programme demanding justice for the victims will be broadcast live in Vietnam, the US and France in early 2010.

Tran Xuan Thu, General Secretary and Vice President of VAVA said on October 6 that the broadcast will attract the attention of the world public. He said that the rejection by a US court of a suit against US chemical companies does not put an end to the lawsuit. In other words, the AO victims will continue to demand justice in the US or in a third country. Some international news online websites will also carry articles on this campaign.

In April next year, a delegation will come to the US to re-launch their campaign. VAVA will then go to Russia and Latin American countries like Cuba, Venezuela and Argentina to continue the campaign.
Posted by AgentOrangeZone at 9:49 AM