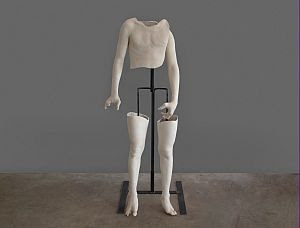 (Host) When Dartmouth student Keisha Luce went to Vietnam earlier this year, she was warned her chances of success were not great.

Luce wanted to find victims of Agent Orange - the defoliant used by the U.S. military during the Vietnam War.

Her plan was to document their stories and create sculptures capturing the deformities believed to be caused by exposure to Agent Orange.

As VPR's Steve Zind reports, Luce's work tells a story about her subjects and about herself.

(Zind) A casual passerby might not notice anything unusual about the stark white human forms on display at the entrance to Dartmouth's Hopkins Center. But a moment's study reveals the forms are casts of human bodies, each with abnormalities. There's a deformed upper torso of a man who is 28 inches tall. Another figure has misshapen feet and hands.

(Luce) "He has what he describes as dinosaur hands and feet. They are severely deformed."

(Zind) Keisha Luce says these six pieces on display at Dartmouth are not works of her imagination; they're casts of real people - Vietnamese people whose defects are the result of exposure one or two generations earlier to Agent Orange. The exhibit is called ‘Sum and Parts'. Luce calls her work documentary sculpture.

(Luce orange) "They are difficult bodies to look at. Part of what I was trying to do is to bring this type of body - the war body - into the public sphere."

(Zind) In the 1960s, the U.S. military sprayed millions of gallons of herbicides on Vietnam to defoliate the forest and jungle and expose the enemy. Agent Orange, which was the most widely used, has been linked to cancer, birth defects and other health problems experienced by American soldiers.

The Vietnamese government, too, says the descendants of those exposed to Agent Orange are similarly afflicted. It is these people, whose parents and grandparents lived in the 1960s, whose lives Luce sought to document in the three months she spent in Vietnam.

Luce says finding and speaking with Agent Orange victims wasn't easy at first, because of institutional red tape. But then she met someone who took her to a place outside Ho Chi Minh City where people suffering from the genetic effects of the herbicide are cared for.

(Luce) "When we arrived, there was a group of people that they called, all victims of Agent Orange and they sat down and I told them my story, what I was doing and I said ‘if anyone wants to participate let me know' and everyone raised their hands."

(Zind) Luce used a skin-safe silicon to make molds of the bodies of volunteers. The painstaking process took up to five hours. Back in the United States she created casts from the molds.

Luce says the idea for the project came to her one day last year. But her awareness of Agent Orange and its effects goes back much further.

(Luce) "My father was a disabled Vietnam veteran. He stepped on a land mine. He was 21 and he lost his right leg and several fingers and his left leg was severely damaged. He returned to the states and in 1987 he got an Agent Orange related cancer and within the year he died."

(Zind) Keisha Luce was ten years old when her father, Scott, died. The family is from Franconia, New Hampshire. Luce says her father's experience gave her an understanding of the effects of Agent Orange - but she didn't really conceive of the project with her father in mind.

(Luce) "I don't think my father would have been someone to go back to Vietnam. I think he could never have moved past his own horrific experience there. I don't know how he would have felt about this project. As this project took life, I realized he became increasingly important. Being in a country where he experienced really traumatic injuries that shaped the rest of his life, it was difficult to know how I would be accepted and how I would feel about being there, but I have to say I would go back.."

(Zind) Luce says none of the victims of Agent Orange she met in Vietnam were alive during the Vietnam War - and none showed bitterness toward the U.S. She says they simply want Americans to know the toll the war continues to take. For VPR news, I'm Steve Zind.

Note: Keisha Luce's work is on display until October 20th at the entrance to Dartmouth's Hopkin's Center in Hanover.

Posted by AgentOrangeZone at 9:08 AM