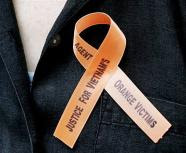 DANANG, Vietnam — Mai Khai contentedly grows his potatoes and melons smack up against an old brick wall surrounding a former US airbase in Vietnam which experts say remains highly contaminated.

Full-scale decontamination has yet to begin, though, and could take years.

While the preparatory work continues, Khai faces only a limited danger from his vegetables, foreign and Vietnamese experts said.

But residents near the airbase do face a more general dioxin risk, they said. A Canadian study found elevated dioxin levels in people living near the north and east of the airbase although neither foreign nor Vietnamese experts could say exactly how many people are at risk from the contamination.

"We have globally, collectively, agreed that this stuff is bad," said Koos Neefjes, an adviser on dioxin to the United Nations in Hanoi.

During the Vietnam War, US forces stored Agent Orange at Danang and other bases where it was loaded onto airplanes for defoliation missions.

Jungle areas that were sprayed do not have high levels of dioxin today, said Thomas Boivin, president of Canadian environmental specialists Hatfield Consultants, who have spent years studying dioxin contamination in Vietnam.

But US and Vietnamese officials have identified the old US bases in Danang, Bien Hoa -- near the former Saigon -- and Phu Cat as significant "hotspots" where spillage, washing of aircraft and loading of the herbicides contributed to contamination.

Almost two years ago Vietnamese officials, assisted by the US, installed a concrete cap over the former Agent Orange mixing and loading area and improved drainage and filtering of lake sediment inside the Danang airbase.

Authorities also banned people from eating fish or other foods from lakes on the property.

These temporary measures have prevented contamination from spreading, officials from both sides said.

The affected area is under Vietnamese military control and is separate from the passenger terminal in Vietnam's fourth-largest city, which authorities want to promote as a tourist destination.

Without further action, contaminated material at the hotspots will continue to be dispersed through soil particles as well as water currents, wildlife and air, Neefjes told annual US-Vietnamese Agent Orange talks this month.

Dioxin can be passed through the food chain via fish or fowl.

Other donors are also assisting but at Vietnam's request, the US is focusing its help on the Danang site.

US officials told AFP that "such a complex and politically sensitive issue" has required consensus both within the US government as well as between the US and Vietnam.

The US has "certainly worked as fast as we possibly can to get moving on this project," US ambassador Michael Michalak said after a senior Vietnamese official complained at the recent talks that US funds had not been disbursed quickly enough.

Bids have been received and a contract will soon be announced for an environmental assessment and preparatory work at the Danang site, Michalak said. In June both sides began testing "bioremediation", the use of biological organisms to destroy dioxin.

The cleanup will require moving tainted soil to a landfill before it can be decontaminated either by biotechnology or another method, said Lai Minh Hien, director of Vietnam's Office 33 which deals with Agent Orange.

Decontaminating all three former bases could cost about 60 million dollars or more, Hien told AFP in an interview, calling for additional funding from the United States.

"We want the US to put in more effort," Hien said.

Michalak countered that it is too early to say what a cleanup would ultimately cost.

Le Ke Son, co-chairman of the bilateral talks, agreed. He said the scope of contamination in Bien Hoa, for example, is greater than initially thought and requires a new study.

The Vietnam War ended in 1975 but the US and Vietnam did not normalise relations until 1995. Twelve years later, with US approval of three million dollars for dioxin mitigation and health activities in Vietnam, American policy changed to support a cleanup, US officials said.

Vietnam blames dioxin for a spate of birth deformities but the US says there has been no internationally-accepted scientific study establishing a link between Agent Orange and Vietnam's disabled and deformed.

Hoang Thi The, 71, a widow who lives near Danang airport, said she knows nothing about the six million dollars but would like US funding for her disabled children.

She kept one hand, as if protectively, on the damaged wheelchair of her son, Tran Duc Nghia, 35, who sat with his mouth open and eyes vacant. His sister Tran Thi Ty Nga, 31, held onto a walker, sweat forming on her neck.

The said doctors told her the children, normal in their earliest years, became affected by Agent Orange.

"I was told that if we lived near the places where Agent Orange was stored or was sprayed, we may be hit by these toxins," said The, who remembered the sound of planes taking off during the war.

"But I did not know that they carried Agent Orange."

Copyright © 2009 AFP. All rights reserved.
Posted by AgentOrangeZone at 2:37 PM