WATCH THE STORY
WASHINGTON (WFLA) - Navy Vietnam Veterans marched from a Washington, D.C. federal courthouse to the steps of VA headquarters with a message: They were poisoned at sea.
New Port Richey veteran Mike Kvintus was among them. 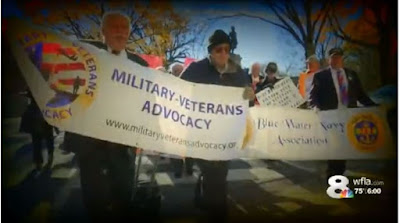 "All of us veterans have taken an oath to defend the Constitution of the United States and with that oath, we expect the country to take care of us," the Navy veteran said.
Instead, with a stroke of a pen, the VA abandoned 90,000 Navy Vietnam veterans who did not step foot on Vietnam soil.
The VA contends unlike troops that served on the ground, these Blue Water Navy veterans were not exposed to Agent Orange.
"It's a national disgrace as far as I'm concerned," Mike added.
The military sprayed 20 million gallons of the toxic herbicide Agent Orange on Vietnam.
It ran into rivers and streams. It contaminated harbors and bays.
Ships like the American Victory, which served in Vietnam, turned contaminated sea water into fresh water. The distillation process only enhanced the chemicals, unknowingly poisoning crew members.
"We took water and distilled it, and actually bathed in it, ate food cooked in it and drank it," Mike explained.
Mike served on the U.S.S. Buchanan, a destroyer that according to deck logs, anchored in Da Nang Harbor when the military sprayed Agent Orange.
"The plume covered that whole harbor," Mike recalled.
The herbicide is known to cause at least 14 illnesses, including some cancers.
Mike suffers from three of the conditions.
"No one else in my family has any of these issues," Mike said.
A bill providing health care coverage and disability benefits for the Blue Water Navy veterans sailed through the U.S. House of Representatives, passing unanimously.
Republican Mike Lee of Utah holds it hostage in the Senate.
Posted by AgentOrangeZone at 10:38 AM