Veterans betrayed again by their government

READ THE STORY
Susie Belanger of Gansevoort, a tireless fighter for Vietnam veterans denied benefits by the U.S. government, was shocked and frustrated.
After a decade of work, the veterans had in June won a rousing victory in Congress — a 382-0 vote for legislation that would restore benefits to “blue water” Navy veterans of Vietnam. Now all they needed was approval in the Senate, and a majority of senators had pledged support. 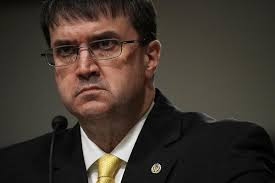 But then on Sept. 6, the new secretary of Veterans Affairs — Robert Wilkie, a man who had said he was on their side — turned his back on Belanger and the thousands of veterans she fights for. In a letter, Wilkie brought up arguments that Belanger has been countering for years — arguments about the science behind the legislation and the cost of it — and he sent that letter to Sen. Johnny Isakson of Georgia, chairman of the Senate Committee on Veterans Affairs.
Now the legislation could stall in committee. Isakson might seek a new study, even though studies have been done and redone. The process could drag out to the end of another Congress at the end of this year, and Belanger and her compatriots could be forced to start over.
“I am shocked,” Belanger said of Wilkie’s turnaround. “After listening to him speak at the confirmation hearing, I went up to shake his hand.”
She recalled the support blue water veterans had gotten from the previous Veterans Affairs secretary, David Shulkin.
“Shulkin was totally behind us. He’s a doctor. He knows what the science says,” she said.
Belanger is a positive person who intimidates the powerful with relentless cheerfulness and a sly sense of humor. But she sounded deflated over Wilkie’s letter.
“It’s such a long haul. I saw that and I wanted to …” her voice trailed off. “I did cry,” she said.
Belanger has been working all these years by the side of John Wells, a retired Navy commander who is the director of Military Veterans Advocacy, which works for veterans’ rights through litigation, advocacy, training and education.
Posted by AgentOrangeZone at 8:36 AM