READ THE STORY
When Julie Taddeo moved to Takoma Park, Maryland, a progressive suburb outside of Washington D.C., and saw ubiquitous yellow flags marking the places where pesticide had recently been sprayed, she was surprised. “Everyone’s a treehugger here in, the Berkeley of the East,” she says. The warnings, which swarmed the lawns of homes and apartment buildings, playing fields, public parks, hospital grounds—and even school bus stops, seemed incongruous. 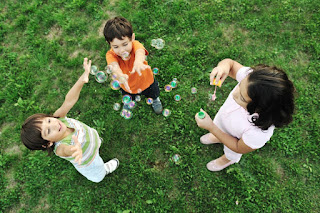 Concerned about her young daughter and the emerging science linking childhood pesticide exposure to pediatric cancer, asthma, and behavioral problems, Taddeo teamed up with a neighbor whose son suffered from asthma. The two began working with city council members to craft a law restricting the cosmetic use of pesticides on lawns on public and private property.
Modeled on an Ontario law, Takoma Park’s Safe Grow Act passed in 2013, and it spurred an outpouring of interest across Montgomery County. “Moms started reaching out to us with their stories,” recalls Taddeo. “One said, ‘My son has a brain tumor and his doctor is convinced that this particular tumor was caused by over exposure to certain pesticides.’”
A group of residents founded Safe Grow Montgomery, an umbrella organization that quickly mushroomed to more than 40 environmental and health organizations, and worked to pass the 2015 Healthy Lawns Act, a county-wide version of Takoma Park’s law. It was the first such law in the nation to restrict pesticides for non-essential use at the county level. (Non-essential means exemptions are allowed for control of invasive pests or human health risks.)
But victory was short-lived. “When one town does it, it’s not a big deal,” says Taddeo. “But when a county tries to do it and you’re a million people, this is when the big guns come out and try to squash it.”
Posted by AgentOrangeZone at 11:19 AM