Veterans Go Back to Court Over Burn Pits. Do They Have a Chance?

READ THE STORY
On May 9, a federal appeals court heard oral arguments in a case about an explosive issue among U.S. veterans: the widespread use of burn pits in Iraq and Afghanistan, and the potential health consequences they suffered as a result. 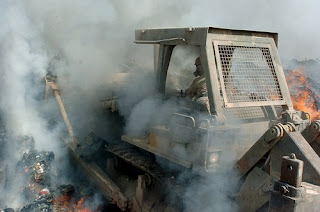 The case, which dates back to 2008, consolidated dozens of lawsuits by hundreds of veterans and their families seeking to recover damages from the military contractor KBR Inc., but a trial court dismissed it in July 2017. It could be at a legal dead end unless the panel of judges, the Fourth Circuit Court of Appeals in Richmond, Va., overturns the dismissal.

The plaintiffs accuse KBR of negligence for exposing them to toxic emissions from open-air trash fires known as burn pits, which they say cause respiratory, neurological and other health problems. In tossing the case last year, the trial court accepted KBR’s argument that the American military made the decision to use burn pits to dispose of trash on bases, and that federal courts cannot second-guess the executive branch’s wartime decisions.
One plaintiff, Lauren Price, a Navy veteran from Pasco County, Fla., who developed constrictive bronchiolitis after working at a burn pit in Baghdad, said in an interview that she has already given up hope. “I’ve stopped paying attention,” she said. After 10 years of litigation, the case is still at the procedural starting gates, and unless the plaintiffs eke out a win on appeal, it will be one of the biggest setbacks yet for tens of thousands of affected veterans who have received zero recompense despite years of advocacy by lawyers and nonprofits.
Posted by AgentOrangeZone at 12:32 PM