They argued for decades Agent Orange affected them at sea. Congress is finally listening

READ THE STORY
After months negotiating with Senate colleagues, the House Veterans Affairs Committee voted unanimously on Tuesday to send to the full House a bill likely to become the vehicle to qualify 90,000 ailing sea service veterans for Agent Orange-related disability pay and health care from Department of Veterans Affairs. 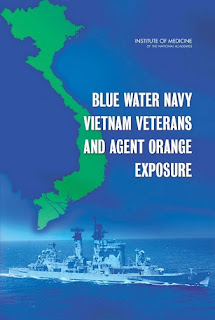 These former naval warriors of the Vietnam War, called “Blue Water Navy Veterans,” have been pressuring Congress for decades to have their illnesses recognized as being caused, as likely as not, by exposure to Agent Orange and other herbicides sprayed on forests and jungle areas during that long war.
The argument is that surely clouds of the toxin also reached ships patrolling in territorial waters or contaminated water that, once desalinated, was used by Sailors and Marines for showering and other purposes while steaming off the coast.
Veterans who served on the ground in Vietnam or patrolled its inland waters, even for a day, have been eligible for VA compensation and care if diagnosed with one of 14 ailments associated with Agent Orange exposure. But independent U.S. scientists who studied the issue concluded in 2011 that they can’t find enough information to determine if Blue Water Navy veterans were exposed.


As a result, VA refuses to presume their illnesses, though on the Agent Orange presumptive list, were likely caused by service off of Vietnam. A lone exception is allowed for Blue Water veterans with non-Hodgkin's lymphoma.
Rep. Phil Roe (R-Tenn.), chairman of the House committee, predicts the Blue Water Navy Vietnam Veterans Act of 2017 (HR 299)will be signed into law this year. He credited the fact that he and hard-working committee staff, for the first time, found a way to cover the $1 billion cost without violating House budget rules against raising a department’s mandatory, or entitlement, spending.

Posted by AgentOrangeZone at 8:09 AM