READ THE STORY
HIGHLANDS, Texas (AP) — Evelyn and Jerome Matula were still polka-dancing newlyweds in 1950 when they spotted a half-finished cottage in the woods along the San Jacinto River east of Houston. It seemed idyllic, with panoramic views and a sandy path to the river, where their three children and later their grandchildren fished. Now, the retired refinery worker and former educator fear their kin were poisoned by carcinogenic dioxin in the fish and well water. 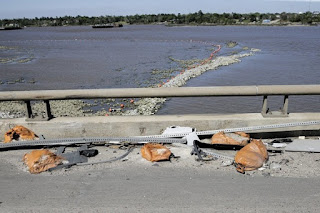 Decades ago, paper mill waste barged down the Houston Ship Channel was buried across the river. From their bluff today, the Matulas can see orange buoys marking a federal Superfund hazardous waste site established in 2008.
An agreement announced last month has cleared the way for the San Jacinto Waste Pits to finally be cleaned up. But dioxin damage already has spread far beyond the waste pits, the Houston Chronicle and The Associated Press found.
More than 30 hotspots — small sites where dioxin has settled — have been located in sediments along the river, the Houston Ship Channel and into Galveston Bay, according to University of Houston research conducted from 2001 to 2011 and pieced together by the news organizations.
The affected areas are alongside parks and residential neighborhoods with thousands of homes. But the residents’ wells or yards have not been tested by state health officials.
Details about the hotspots have not been made public by Texas environmental regulators, who used more than $5 million in federal money to pay for the research. In 2012, they ended a fact-finding committee that oversaw the project and had proposed new standards for dioxin and PCBs that could have been costly to corporate polluters.
The Texas Commission on Environmental Quality refused to release the full results of the studies that identified the sources of dioxin and PCBs, even to academic researchers, Harris County officials and lawyers who later sued companies over environmental damage. The research funding ended in 2011, leaving unanswered questions about whether toxic damage spread even farther during hurricanes Ike and Harvey.
Posted by AgentOrangeZone at 11:46 AM