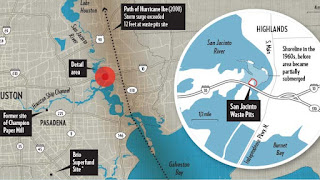 We were warned and failed to act.
After Harvey, we must.

Environmentalists have said for years the San Jacinto Waste Pits — filled with decades-old paper bleaching waste —was vulnerable to flooding with the risk that waters would spread sediment heavily contaminated with cancer-causing dioxins.
“I think this is a loaded gun, in terms of a catastrophe. Not just to the residences, but the bay as a whole,” Sam Brody of Texas A&M University Galveston said in 2013 about the threat of a hurricane or flood to the capped waste pits. Why? Because soil from the waste pits contains dioxins and other long-lasting toxins linked to birth defects and cancer.
Did Harvey’s record rainfall set more poison free?
No doubt. Hurricane Harvey’s floodwaters spread uncontainable toxic materials over a wider area, making a tragic situation worse.
The waste pits were completely covered with floodwaters. The AP reported that the flow from the raging river washing over the toxic site was so intense it damaged an adjacent section of the Interstate 10 bridge.
In 2011, a temporary cap was installed on the waste pits but was damaged during a relatively minor storm in 2012. Since then, the waste pits cap has required extensive repairs on at least six occasions, with large sections becoming displaced or going missing.
No doubt Harvey’s record rainfall set more poison free.
MORE
Posted by AgentOrangeZone at 11:59 AM