Forty-two years after the fall of Saigon, veterans from The Villages® and countless others are still battling the aftermath of Agent Orange.
READ THE STORY
Michelle Beardon

It was 1966. Bob Westfall was just 19, a kid really, too young to vote but old enough to fight for his country. He wasn’t much different than most of the young men who were either drafted or enlisted for an unpopular war halfway across the world. How bad could it be to leave a hardscrabble life on the poor side of the tracks in Newburgh, N.Y. for an adventure paid for by Uncle Sam?
A lot worse than he could have imagined.
“I suppose if you got out of it alive, you did ok,” says Westfall, now 70. More than 58,000 of the 2.6 million Americans sent to the Southeast Asian country didn’t make it, their names now inscribed on The Wall at the Vietnam Veterans Memorial in Washington, D.C.
Westfall spent 23 months there, mainly in A Shau Valley in the northernmost part of South Vietnam, a key infiltration route for North Vietnamese forces and site of some of the most fierce battles of the war.
By the time he completed two tours of duty as an Army communications specialist, Westfall survived bungee pits, a cyst on his spine and a peppering of shrapnel that was removed on the field by a medic with pliers. Westfall took home a Purple Heart for his combat injuries and enough bad memories to fill the next five decades.
What he didn’t know was that after leaving the steamy jungles of Vietnam, he would go home to fight a different war – this one with Agent Orange. 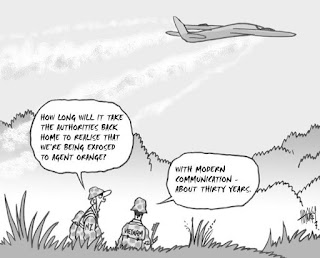 “We saw what it did to the land,” he says of the powerful herbicide used in Vietnam by the United States military. “No one was thinking of the damage it was doing to the humans.”
A resident of The Villages in Central Florida, Westfall has fought lymphoma, a blood cancer that traveled through his neck, groin and spleen. He ingested so much chemotherapy that it calcified his adrenal gland and thickened the walls of his bladder. He has dealt with depression, alcoholism and post-traumatic stress disorder. Because the U.S. Department of Veterans Affairs considers lymphoma one of 18 presumptive health conditions connected to Agent Orange exposure, Westfall earns a monthly disability check.
But that’s not the end of it.
Some studies have linked birth defects and other medical issues to children, and even grandchildren, of Vietnam veterans at a higher rate than the general population. Westfall says it is no coincidence that his 43-year-old daughter and two grandchildren struggle with learning disabilities.
MORE
Posted by AgentOrangeZone at 12:36 PM