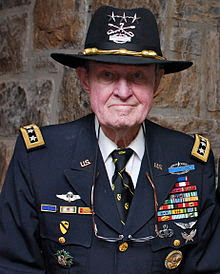 Retired Lt. Gen. Hal Moore, the commander at the Battle of Ia Drang in 1965 that led him to co-author the book, “We Were Soldiers Once, and Young,” died Friday at his home in Auburn, Ala. He was 94.
Joe Galloway, an award-winning journalist, former McClatchy columnist and co-author of the best-selling book with Moore, said news of his death hit him hard on Saturday.
“I just lost my best friend,” Galloway said from his home in Concord, N.C. “I remember that none of us would have come out of there alive if it weren’t for Hal Moore and his brilliance as a combat commander.”
Arrangements are still incomplete but a funeral mass will be held at St. Michaels Roman Catholic Church in Auburn. A memorial service and burial will follow at Fort Benning.
Galloway said he now must keep a promise he and Moore made to each other years ago.
“I’ve got to tell you that he is having the last laugh on me, because 20 years ago he insisted that we shake hands on a deal that whichever died first, the other one had to preach his funeral,” Galloway said. “I will get in my car Thursday and drive down to Auburn, Ala., from Concord, N.C., and on Friday afternoon at the National Infantry Museum at the memorial service for my best friend, I have the honor and duty of standing up and preaching his funeral. He lasted almost to 95. I was beginning to think he was going to outlive all of us.” Moore was born on Feb. 13, 1922, in Bardstown, Ky., to Harold and Mary Moore. For Moore, his military career started 1945 when he graduated from the U.S. Military Academy at West Point and was commissioned as a second lieutenant in the infantry. He served with the 187th Glider Infantry Regiment in Sapporo, Japan. He later was reassigned to the 82nd Airborne Division at Fort Bragg, N.C., where he jump-tested experimental parachutes and made more than 130 test jumps in two years.
Moore served during the Korean War as a regimental operations officer.


He came to Fort Benning in 1964 and commanded a newly formed air mobile 11th Air Assault Division which was undergoing air assault training and testing.
As a lieutenant colonel during the Vietnam War, Moore was commander of the 1st Battalion, 7th Cavalry Regiment during the Battle of Ia Drang in 1965. The regiment had about 450 soldiers when they arrived at Landing Zone X-Ray in the Ia Drang Valley but was outnumbered by more than 2,000 soldiers from the Peoples’ Army of Vietnam.
MORE