READ THE STORY
By Robert Rodriguez
brodriguez@fresnobee.com
A Fresno County Superior Court judge has ruled against chemical giant Monsanto in its fight to prevent California regulators from listing the key ingredient in its popular weed killer Roundup as a carcinogen.
The tentative ruling, issued Friday by Judge Kristi Culver Kapetan, was welcomed by environmental advocates, their attorneys and those who say they got cancer from using the weed killer. 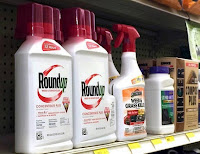 “I don’t want anyone to go through what I have gone through,” said John Barton, a Bakersfield farmer who believes the use of Roundup caused his non-Hodgkin lymphoma.
Monsanto, a multinational agrochemical company, has denied any link to cancer through the use of glyphosate, the active ingredient in Roundup, one of its most widely used products.
It sued the state’s Environmental Protection Agency’s Office of Environmental Health Hazard Assessment last January after the agency issued a notice of intent to add glyphosate to its Proposition 65 list of chemicals known to cause cancer.
Monsanto and its lawyers have said the state is out of step with other regulatory agencies, including the U.S. Environmental Protection Agency and the European Food Safety Authority, in listing glyphosate as causing cancer.
“The agency’s flawed and baseless proposal to list glyphosate under Proposition 65 not only contradicts California’s own scientific assessment, but it also violates the California and U.S. constitutions,” said Samuel Murphey, a Monsanto spokesman. “Monsanto will continue to challenge this unfounded proposed ruling on the basis of science and the law.”