READ THE STORY
Fallout from the Vietnam War keeps coming.
Four decades later, that fallout is spilling over from the war’s veterans to succeeding generations: Serious, sometimes life-threatening diseases are cropping up in families of veterans who were exposed to the notorious exfoliant Agent Orange.

The herbicide was sprayed over the jungles of South Vietnam from 1962 until 1971, when a study linked a key compound in Agent Orange to 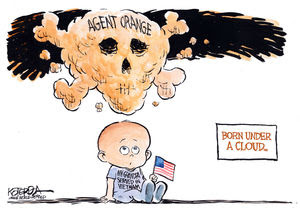 The federal government took years to acknowledge and confirm links between Agent Orange and certain health problems in Vietnam veterans.

Now, as detailed in Liewer’s recent reporting, the Vietnam Veterans of America and other advocacy groups believe that a variety of birth defects, diseases and medical conditions being seen in male Vietnam veterans’ children and grandchildren are also tied to Agent Orange.

Army veteran Terry White remembers the birth of his daughter. “When (Christina) was born, the doctor examined her fingers, her toes, her mouth, everything,” he said. “She pointed it out to me, all the things that were wrong. I just sat down and cried.”

The problem: Research is scant to determine whether Agent Orange and other toxic substances used in the war are truly responsible for the health problems suffered by the children and grandchildren of male veterans.
MORE
Posted by AgentOrangeZone at 2:55 PM