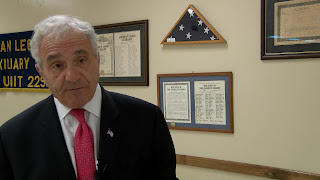 A company founded by a former Veterans Affairs secretary has won a major share of more than $6 billion in agency contracts, even as the firm is being investigated on charges that it wrongly denied medical benefits to some veterans.

Winning the major share of a contract for medical exams was QTC Medical, a subsidiary of Lockheed Martin that was founded by former VA Secretary Anthony J. Principi. Since selling his company in 2011, Principi's lobbying firm has taken on Lockheed as a client, specifically to deal with the VA and its need for medical exams.
The contract awarded to QTC of Diamond Bar, Calif., in late March is under challenge from multiple protests filed with the Government Accountability Office.
VA spokesman Henry Huntley said the new contract would be put on a 100-day hold while authorities examine the complaints. That hold, however, means that QTC will continue providing medical exams under its old contract.
Congressional lobbying records show Principi's firm, The Principi Group, registered as the lobbyist for Lockheed Martin in 2014.
In an email response to questions about his lobbying and the recent bids, Principi wrote, “I have not lobbied for QTC on its rebid nor do I have any knowledge or information on any of your other questions.”
Even as the bid was being awarded and protests filed, a House committee has launched its own probe into allegations that QTC routinely denied benefits to veterans suffering from the after-effects of exposure to Agent Orange.
A spokesman for Rep. Jeff Miller, a Florida Republican, said an investigation is under way into allegations that QTC failed to properly evaluate veterans claiming disabilities from exposure to Agent Orange under an existing VA contract.
MORE
Posted by AgentOrangeZone at 2:50 PM