CAMP FOSTER, Okinawa — The ongoing Japanese recovery of herbicide- and dioxin-tainted barrels just outside Kadena Air Base alarmed hundreds of residents this week who fear for the safety of children at adjacent on-base schools. 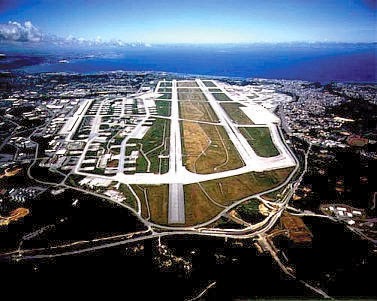 After seven months of testing, Japan’s government has found no indication of wider soil or water contamination, and the Air Force has said base drinking water is safe.
But those results were less than reassuring for Kadena residents, whose fears were fueled by dire warnings from an advocate for victims of herbicide contamination. They sought more information, rallied on Facebook and petitioned for a town hall meeting as word spread that drums with dioxin residue are buried within sight of the schools.
Twenty-two empty Dow Chemical drums have been unearthed since June, and another 11 unidentified containers have been detected but remain buried at the Japanese soccer field, which is separated from Kadena’s Amelia Earhart Intermediate School and its playground by a raised expressway. The Bob Hope Primary School and the Kadena middle and high schools are nearby.
Posted by AgentOrangeZone at 5:48 PM