Da Nang is one of Vietnam's major ports, a city rich in history. It was where the French first landed in the 19th Century in their quest to control the area and where US forces established a large air base during the Vietnam war. 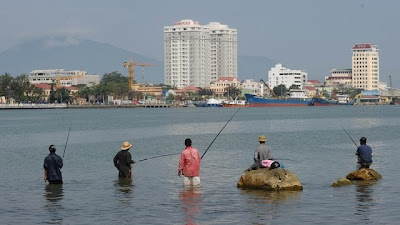 The roads are broad and inviting, the boulevards that run along the riverfront are clean and filled with quaint little riverside cafes.

The mix of old and new buildings in many parts of the city gives you a real sense of how much this place has changed over the years.
A lot of money has been pumped into this city and it shows. The local government wants to turn it into Vietnam's most liveable city.
But Da Nang is also known for having one of the highest contaminations of dioxin from the use of Agent Orange by US forces during the Vietnam war.
Dioxin is one of the most highly toxic pollutants. It can cause reproductive and developmental problems, damage the immune system, interfere with hormones and also cause cancer.
In most countries dioxin levels must not exceed 1,000 ppt (parts per trillion) in soil. Industrialised nations have much lower levels of dioxin contamination in soil, on average, less than 12 ppt.
In Da Nang dioxin levels are found up to 365,000 ppt.
READ MORE: http://www.bbc.co.uk/news/world-asia-23497563

Posted by AgentOrangeZone at 8:01 PM