Vietnamese AO victims to get free check-ups in Korea 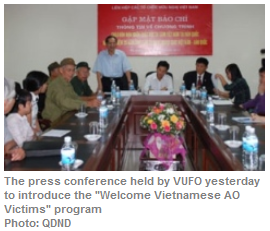 Eighty Vietnamese victims of Agent Orange will receive free medical check-ups in South Korea during their trip to the country starting June 4 under a program titled “Welcome Vietnamese AO Victims”.

The 5-day program, which marks Vietnam – South Korea Friendship Year 2012 and the 20th anniversary of the two countries’ diplomatic ties, is jointly organized by the Vietnam Union of Friendship Organizations (VUFO), the Korean Television MBC and the Korean Victims of Agent Orange Veterans Association (KAOVA).

Besides receiving free check-ups at Yonsei Hospital, the Vietnamese AO victims will take tours of famous relics and tourist attractions and attend a cultural exchange program with their Korean counterparts.

This humanitarian program shows the solidarity and friendship between Vietnam and South Korea and is a good opportunity to attract more support of the international community for AO victims in Vietnam, VUFO said.

KAOVA general secretary Kim Dae Jong said the same program will be organized every year as an annual event.

He also said the Agent Orange’s effects on humans in South Korea has prolonged to the third generation.

In Vietnam, about 4.8 million people were reportedly exposed to AO during the Vietnam War before 1975, resulting in around 400,000 people being killed or maimed, and 500,000 children born with birth defects.

Women had higher rates of miscarriage and stillbirths, as did livestock such as cattle, water buffalo, and pigs.

When in human bodies, AO will weaken their immune systems to make victims prone to various diseases, including cancer, Phong said.
Posted by AgentOrangeZone at 6:05 PM