ELMIRA — Ron Harpelle says there are over 22,000 toxic sites in Canada, but the one in Elmira “happens to be very dramatic.” 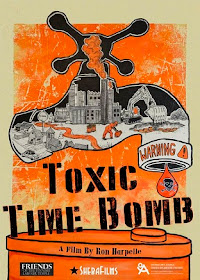 Harpelle and Kelly Saxberg are filmmakers from Thunder Bay with a production company called ShebaFilms. Their documentary, “Toxic Time Bomb,” is about Elmira’s notorious Uniroyal debacle: the irresponsible disposal of chemical waste into Canagagigue Creek.

The waste was produced from making Agent Orange, a powerful herbicide containing dioxin that was sprayed in Vietnam during the Vietnam War to clear foliage.

Along with Agent Orange, the plant also made DDT, NDMA and other harmful, cancer- and deformation-causing chemicals from 1948 to 1970.

The documentary received its premiere earlier this month at a livestreamed Vietnamese-French film festival within a larger arts and discussion event, bringing attention to the use of Agent Orange during the Vietnam War. The event is also focusing on the continuing suffering and negative health effects still happening today.

“If you ask the average Canadian, they have no idea of our role. They think the Vietnam War was someone else’s war. We did participate because we manufactured Agent Orange,” said Harpelle. “There is a Canadian connection and Canadians should be aware of it.”

As a result, Elmira’s aquifer, the source of its drinking water, was poisoned and rendered undrinkable. Elmira’s water is now piped in from Waterloo. The Canagagigue Creek, which drains into the Grand River, was also poisoned.

“Toxic Time Bomb” is also a documentary about the decades-long struggle of activists in the area to advocate for the cleanup of the chemicals, said Saxberg.

Posted by AgentOrangeZone at 10:16 AM